Thank you for your patience while we retrieve your images.

Examples of previous work for Andrew 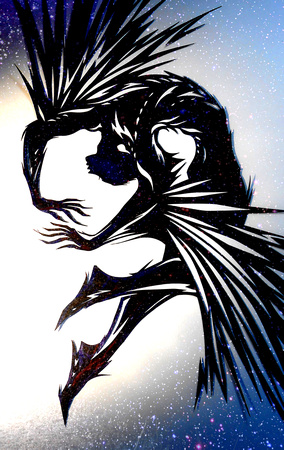 Michael Pilath's poem Ikarus spoke to me particularly. I found it compelling in the way that it evokes the ambiguity of an unresolved love story. The imagined bliss of union with the beloved is set in sharp contrast with the agony of falling back into reality, by alluding to the mythical story of Icarus, who famously flew too near the Sun and fell to his death. Icarus is generally seen as a tragic victim of his own reckless ambition, but on another level he may be seen as one whose heroic passion culminates in a form of divine transformation or transfiguration: like every superstar who dies 'tragically' young in the pursuit of some glittering ecstatic vision that goes beyond the strength of his physical body to sustain, he falls into glory and becomes a legend. In Pilath's poem, our hero picks himself up and re-draws his own wings in thought, in order to soar hopefully upwards anew. In my illustration for the poem, I wanted to depict a dramatic figure caught in motion, torn between agony and ecstasy. My initial free-flowing sketch becomes a crisply defined paper-cut design, in which spikey, scribbled lines suggest intense feeling, yet potential disintegration. Elongated limbs and fingers yearn to stretch beyond the confines of the physical frame.
© Loïs Cordelia