Thank you for your patience while we retrieve your images.

Taj Mahal by Sun and Moon (The Big Sleuth)

Lois Cordelia’s design for The Big Sleuth is called "Taj Mahal by Sun and Moon" and is inspired by one of the major themes chosen for the 2017 trail to mark the 70th anniversary of Indian Independence as well as Birmingham City Council's Year of South Asian Culture (Utsav). In the context of these themes, the regal, grounded stance and cosmic theme of the SunBear suggested to Lois the monumental motif of the Taj Mahal, which has frequently featured in her speed-painting. Visitors to one of India's best known architectural landmarks often remark that the Taj Mahal is as beautiful by moonlight as it is by day, maybe more so.
The SunBear is Lois's third Wild in Art adventure. She previously completed a golden pig, Pig-geswyk, for her hometown's 2016 trail: Pigs Gone Wild, and a Jane Austen inspired BookBench (for Sitting With Jane, Basingstoke). Lois gains a growing reputation as a "speed-painter", working fearlessly in public, performing live art demonstrations in a wide range of venues. She painted her pig, Pig-geswyk, within 2 days, and her BookBench, 'Look Upon Verdure', in the space of 4.5 hours, talking to dozens of visitors as she worked. Sadly, in the case of the SunBear, the allocated painting space in Birmingham city centre was not on public view, but Lois has recorded her progress via a series of photographs, timelapse and video.
Despite being known as a "speed-painter", Lois comments that she never sees painting as a race against the clock. She simply prefers to work swiftly, painting from the shoulder with a big brush and acrylics to create sweeping lines full of movement and energy, even within an apparently static subject matter such as the majestic monument of the Taj Mahal. Her favourite motto is: Less is more.
Lois's paintings often feature shimmering, iridescent and metallic colours, which catch the light in unexpected ways as the viewer walks by. Her pig Pig-geswyk featured twin townscapes of her hometown of Ipswich, rendered in metallic gold and bronze paints, which aptly earned it the epithet of "Shimmering Pig-geswyk" in the local press. Lois's design for Birmingham's The Big Sleuth similarly features iridescent and metallic paints to evoke the beauty of the "Taj Mahal by Sun and Moon". 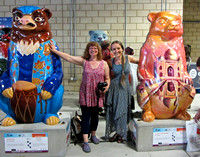 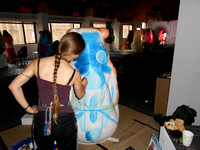 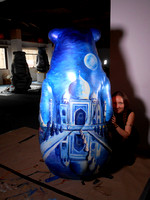 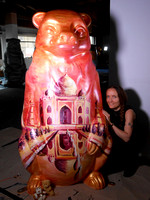 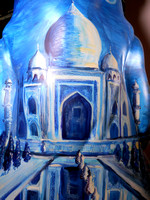 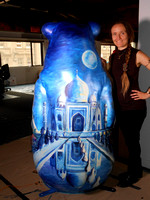