"Rastafari & the Arts" features article and paintings by Lois Cordelia

Darren J. N. Middleton's new book, Rastafari and the Arts, (Routledge, February 2015, published to coincide with the 70th birthday of Rastafarian reggae legend Bob Marley) is a fresh and engaging introduction to Rastafarian spirituality and religion, seen through the medium of the arts. An article and several Rastafari-inspired paintings by Loïs Cordelia are featured in the book. 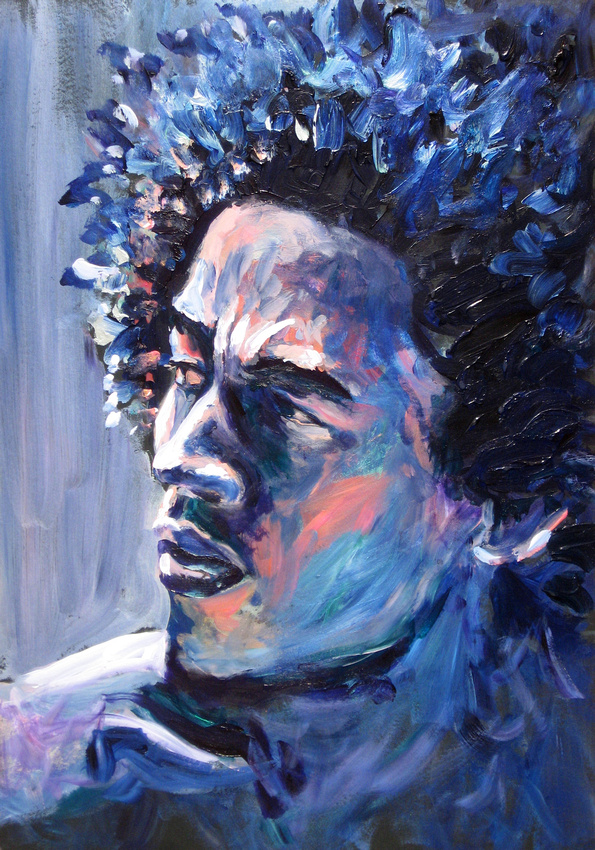 Bob Marley in blueMedium: Acrylic on board.

Comments:
Loosely based on a photograph. Portrait of Robert Nesta Marley. Painted during a live painting demo at Open the Gate cafe, Dalston, London.

Price: £SOLD. In a private collection in Ipswich, England. 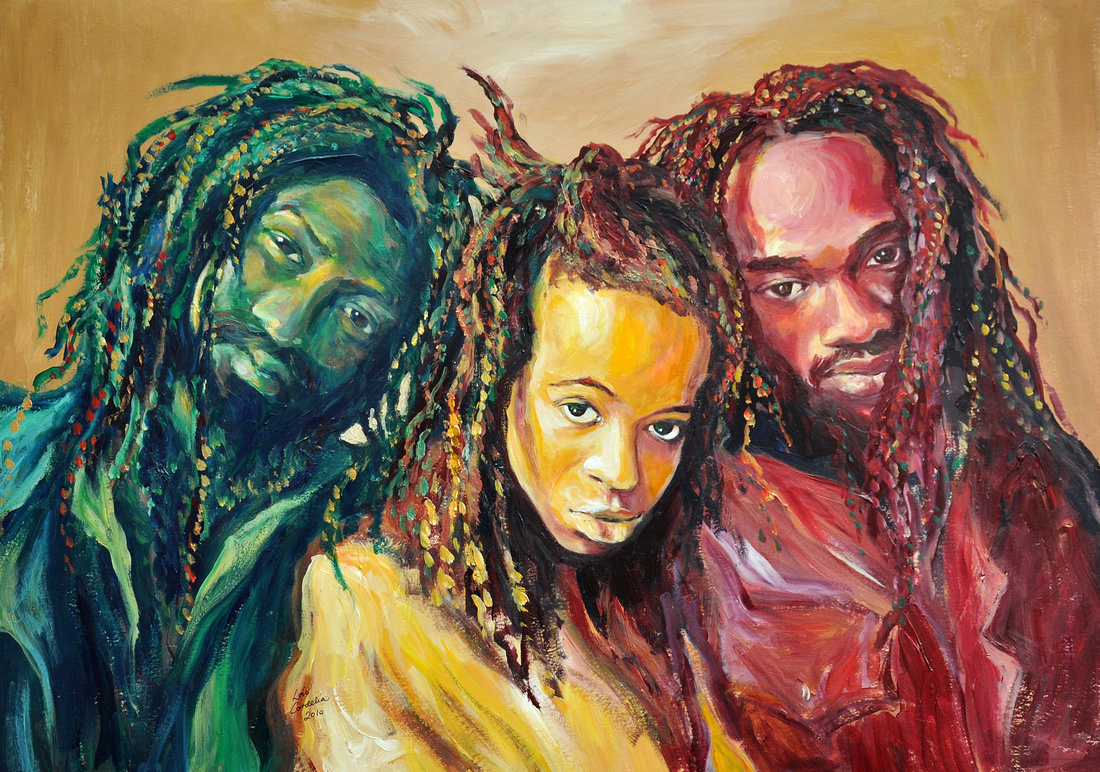 Medium: Acrylic on board.

Comments:
Loosely based on a photograph. Portrait of the founding trio of the reggae band Black Uhuru, painted in the red, gold and green Rastafarian tri-colour. 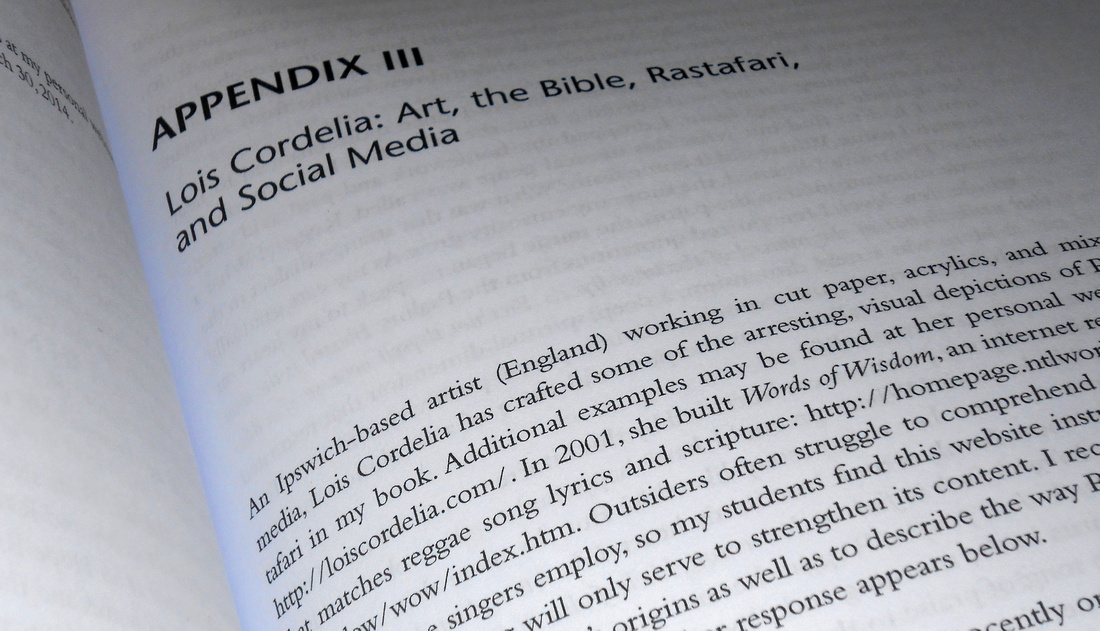 When did you develop your site, and how would you describe your mission, as it were?

My love affair with roots reggae began very innocently one evening when I was about seven years old. My proud German mother, having brought me up on the strictest diet of Mozart, Beethoven and the like, had never intended that I should discover anything outside the realm of the Western Classical musical repertoire. But one evening, when my parents had finished the washing-up, they made the fateful mistake of leaving the kitchen radio playing and disappearing upstairs.

To me it was a peephole into a forbidden world.

Being broadcast was one of those shows based around a selection of records chosen by the interviewee that he or she would not wish to be without, should they ever chance to be washed up on a desert island. I remember neither the name of the man being interviewed nor the name of the record he chose; I remember only that it grabbed me, almost physically, like a hand laid firmly but warmly on my shoulder as I stood lingering in the corridor, and it wouldn't let go. I had never even heard of reggae at that age. I had no idea what it was that had spellbound me.

Truly, reggae is the music of the heart, for it echoes the gentle, soothing rhythm of the heart’s own beat. It was so distinctly different from anything I had ever heard before that I was instantly transfixed.

It was earthy, fruity, spicy and sweet, oozing warmth, laughter and playfulness, sun-drenched, sun-ripened, filled with all the exotic scents of the trade winds. To a young and fertile mind, it was like discovering a wonderful new cuisine from a distant land.

It was love at first listen.

Several years would pass, however, before I once more chanced to hear that enchanting sound world drifting from the radio. But I wasn’t going to let it elude my grasp again. I dropped my homework and paid avid attention. I had to find out what this musical genre was called.

Reggae! What a beautiful name. Where did it come from? What was that strange dialect in the lyrics? The more I listened, the more my curiosity grew.

As my ears gradually became more attuned to the patois, the music began to speak to my heart on a whole new level. I recognised quotations from the Psalms: Blessed is the man that walketh not in the counsel of the ungodly… Fret not thyself because of evildoers… Here was a new dimension, a deep, spiritual dimension that resonated through harmonious and conscious living, peace, positivity and love. To a passionate young idealist, it was the powerful voice of a revolution that was about to transform my life.

Naturally, my parents were horrified by this bizarre new obsession of mine with “Black music”. Whatever could have happened to their obedient little daughter to cause her to go astray like this? But the more their opposition grew, the more firmly it took root in my heart. Like a tree planted by the rivers of water, that bringeth forth its fruit in due season; his leaf also shall not wither, and whatsoever he doeth shall prosper. Reggae became my daily devotional music that lifted my spirits in the morning and played in my heart all day long, a vibrant and energetic song of praise to the Creator, who himself seemed to take on a radical new dimension with a strange and beautiful new name: Jah Rastafari.

Moreover, reggae preached the unity of all God’s children as brothers and sisters, united in peace and love. Behold, how good and how pleasant it is for brethren to dwell together in unity! Naïve, perhaps, but a timelessly powerful and beautiful ideal to fight for, nevertheless.

Above all, reggae kindled in me the spirit of rebellion that would inspire me in the coming years to challenge many things that I had been taught to accept as convention. This is dub revolution – music to rock the nation… Like any true revolution, it shook my world to its foundations and triggered a period of restless turbulence and discontent, but ultimately paved a new path towards freedom. Emancipate yourselves from mental slavery; None but ourselves can free our minds… Won’t you help to sing these songs of freedom… Redemption songs … Many of my friends, both Black and White, have been baffled at how I came to relate so strongly to this message of emancipation, which after all was supposed to be relevant only to the descendants of Black African slaves – surely, no?

But of course, the message of liberation has a timeless and universal appeal to anyone who has ever felt inhibited, thwarted, or repressed, whether physically, emotionally, intellectually, spiritually, or artistically. Get up, stand up! Stand up for your rights! … Hence, reggae inspired me to begin pushing back the narrow confines of my sheltered upbringing in a polite, White, middle class, Anglo-German family. Not to imply that I rejected my own cultural roots (as my parents seemed to fear), but simply that I was no longer content to be defined and restricted by them. To this day, I defy being put in a box and conveniently labelled as “Christian”, “Hindu”, “Pagan”, or even “Rastafarian”. To hell with “isms and schisms”! Among the countless spiritual paths I have explored, the Rastafarian philosophy is one of the few that strikes a healthy balance – so essential for the modern world – between emphasizing on the one hand the unity of all people and on the other the fierce spirit of individualism.

Perhaps for this reason, Rastafari has influenced me and captured my imagination most deeply in my capacity as an artist. The spirit of rebellion expresses itself time and again in my artwork through the restless energies of a dancing figure, the defiant gaze of a subject’s eyes, or the resilience of the human spirit, which, though inhabiting a fragile bodily frame, manifests superhuman strength in the face of opposition. Much of my work has been created while listening to roots reggae; much of my recurring imagery – lions, nomadic prophets, gnarled trees and tree roots, fire, dancing figures, angels – is inspired by the imagery of roots reggae, itself largely drawn from the Old Testament. Ironically, many of the pieces that have been most directly inspired by reggae and Rastafari are among those of my creative efforts that my mother has most praised for their energy!

By this time, I had become fascinated by the significance of the biblical references and allusions in reggae song lyrics, so much so that my curiosity evolved into an ongoing project: Words of Wisdom. The website has now been running since 2001, since when I have lost count of the messages of appreciation I have received. I have never consciously considered this labour of love as a “mission”. I have simply sought to explore and immerse myself in the beauty of Rastafari, and if sharing my discoveries with others has been a source of blessing and inspiration to them also, then my joy is doubled.

Today, anthropologists tell us that Africa was the true cradle of humankind. This seems to evoke a very deep emotional response in many people, even in those who are not of recent African descent. It is easy to dismiss this feeling as the projection of a romanticised ideal of the primordial earthly paradise. But such a widespread resurgence of interest in all things African may suggest some lingering consciousness of a universal African aboriginal identity of humankind.

As the roots of a plant anchor it in the ground and give it stability, the knowledge of one's cultural and spiritual heritage gives a sure foundation on which to build one's sense of identity. It may also engender deep feelings of appreciation, admiration and respect for those who have gone before and helped to shape our modern world. Thus it may reverse the current trend of dismissing our ancestors as simple minded folk who believed in magic and miracles and the sacredness of things, so that perhaps ultimately we can learn from them important and refreshing lessons for our secular age.

The prevailing assumption in the West that progress demands us to turn our backs on the past and look instead to the future has caused tradition, myth and ritual to be forgotten. Such ancient relics appear to have no relation to our present existence. We often speak of them being 'stuck in the past'. But the Rastafarian concept of roots and culture is based on a much more dynamic and flexible understanding of 'tradition' as living, constantly evolving, adaptive and adoptive, the collective experience of communities accumulated by successive generations since time immemorial.

If we look to the past, which is known, rather than to the future, which is unknown, we are not prone to suffer from blindness of vision, and so we gain a true sense of perspective in time, seeing our own place in history. The future need not surprise us unawares, for it is not substantially different from the past: tomorrow contains elements of yesterday and today.

Thus the past is the key to the future, just as the awareness of cultural roots is the key to society's progress, and the acknowledgement of one's spiritual roots in God is the key to mystical union with the Most High.

I would never claim to be a Rastafarian, any more than I would claim to be anything else. But I feel it deep in my heart.