"A map is a magic carpet for the mind" - Creative Cartography

"A map is a magic carpet for the mind."

Loïs Cordelia's creative cartography designs include some of her largest, most elaborate and intricate paper-cut works to date. Cutting out of paper with a surgical scalpel, she creates "maps" that incorporate visual references to the symbols, emblems, mythology, legends, flora and fauna of countries and continents, delicately moulded into the shapes of the coastlines. Below are shown a selection of these designs, including several different versions of the British Isles, and of Ireland in particular, evoking the immense diversity of our native folklore and pagan heritage. The African continent is another popular choice, focussing on its dramatic wildlife and bold colours. Loïs's rendition of North America is placed within a Native American dream-catcher, while her depiction of the Isle of Wight suggests the contrast of the two halves of the island: the windswept trees of the west and the rich biodiversity of the east.

Loïs's cut-paper "maps" make ideal gifts for your loved ones for birthdays, anniversaries and other special occasions, and can incorporate personal references, symbols, names, dates, quotations, and so on. You are welcome to browse further examples in the "Creative Cartography Maps" gallery listed under "Portfolio" above (see also "Personalised Commissions"). Please contact Loïs to commission a piece today. 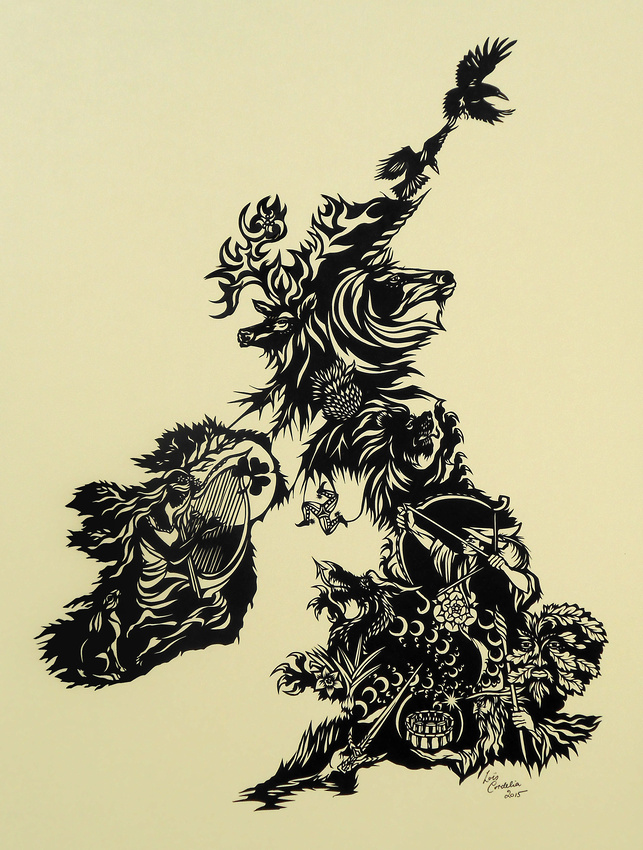 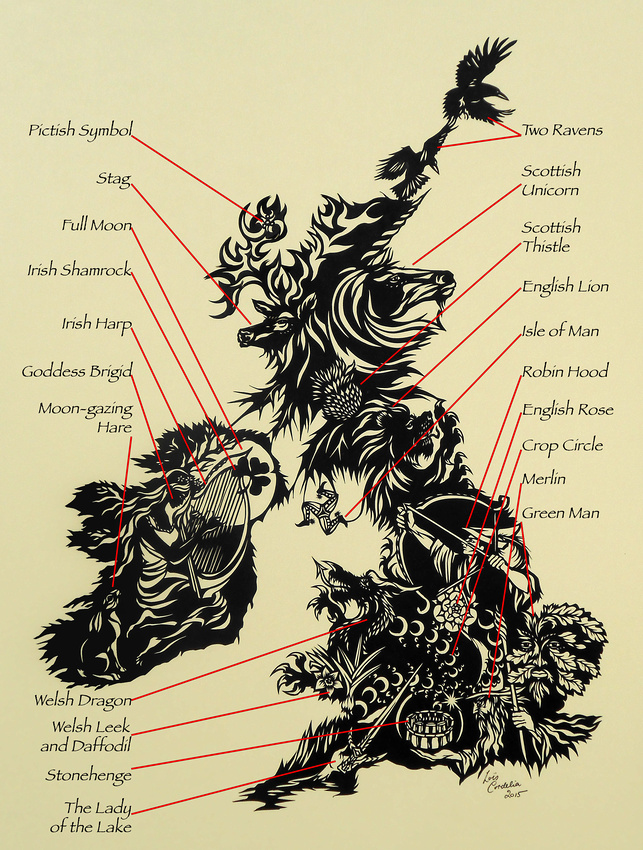 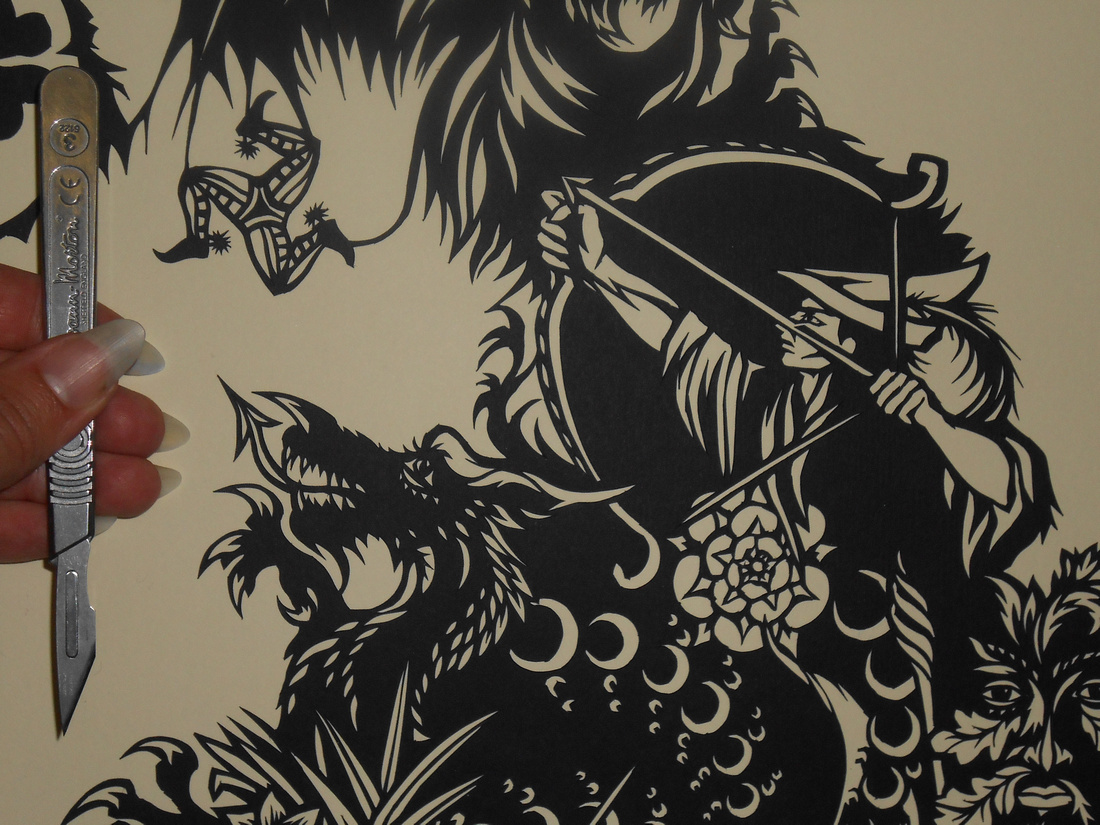 The Scottish Unicorn and the Stag give shape to the coastlines of Scotland. An ancient Pictish symbol is embedded in the Stag's antlers. 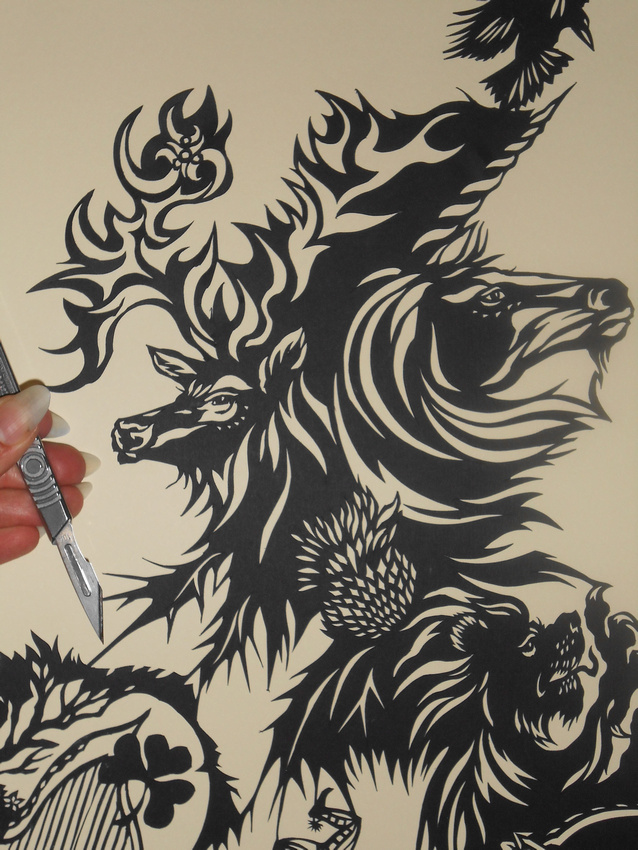 Part of the same design, above: Ireland incorporates the Goddess Brigid, playing the Celtic Harp, emblem of Ireland, and the Moon-Gazing Hare. 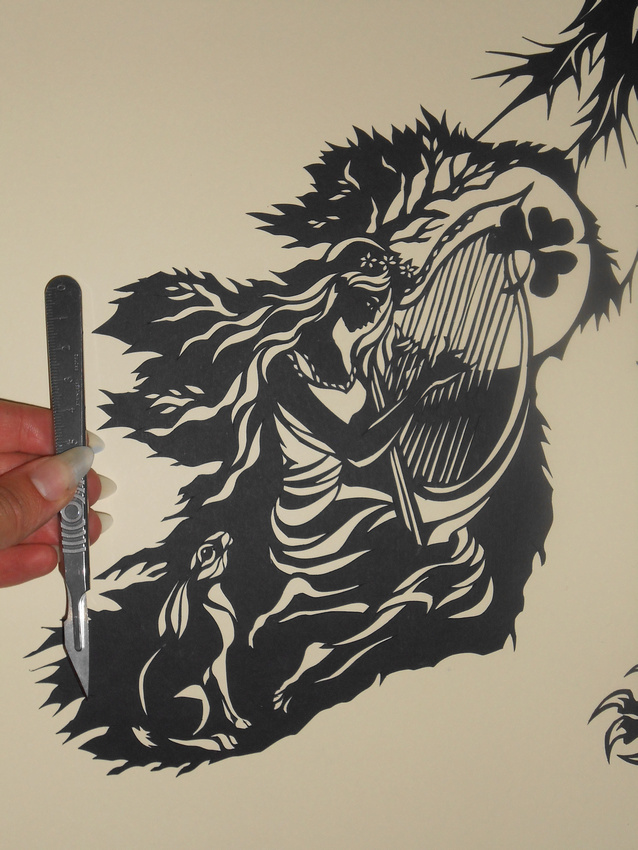 An alternative version of Ireland (below), cut out of dark green paper: "The Spirit of Ireland" depicts Brigid as the Goddess of Fertility, Fire, Youth and Spring, wearing a necklace of Shamrock leaves, dancing through the interlocking shapes of the Triple Moons. 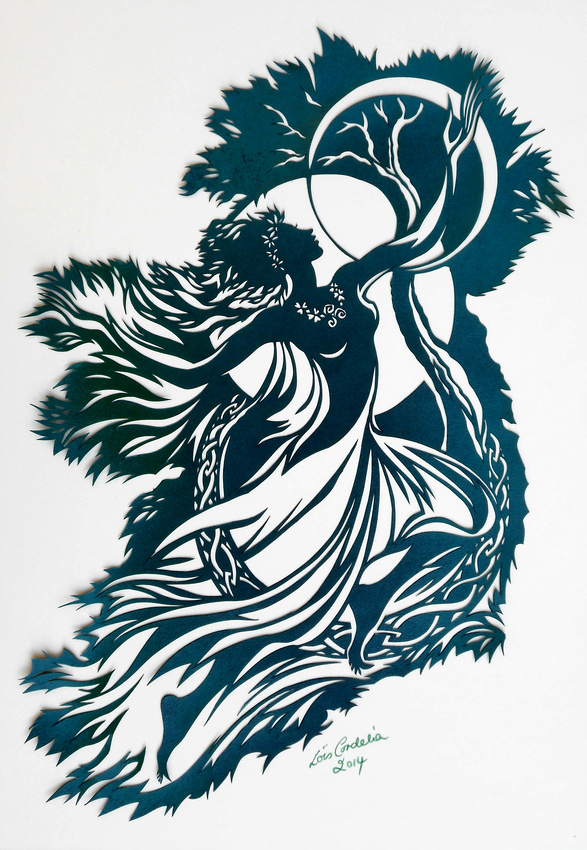 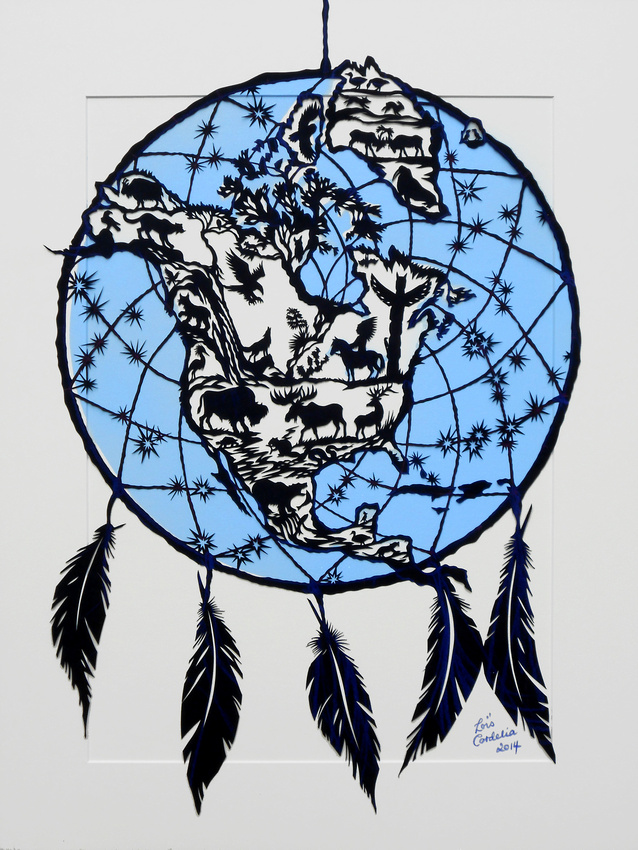 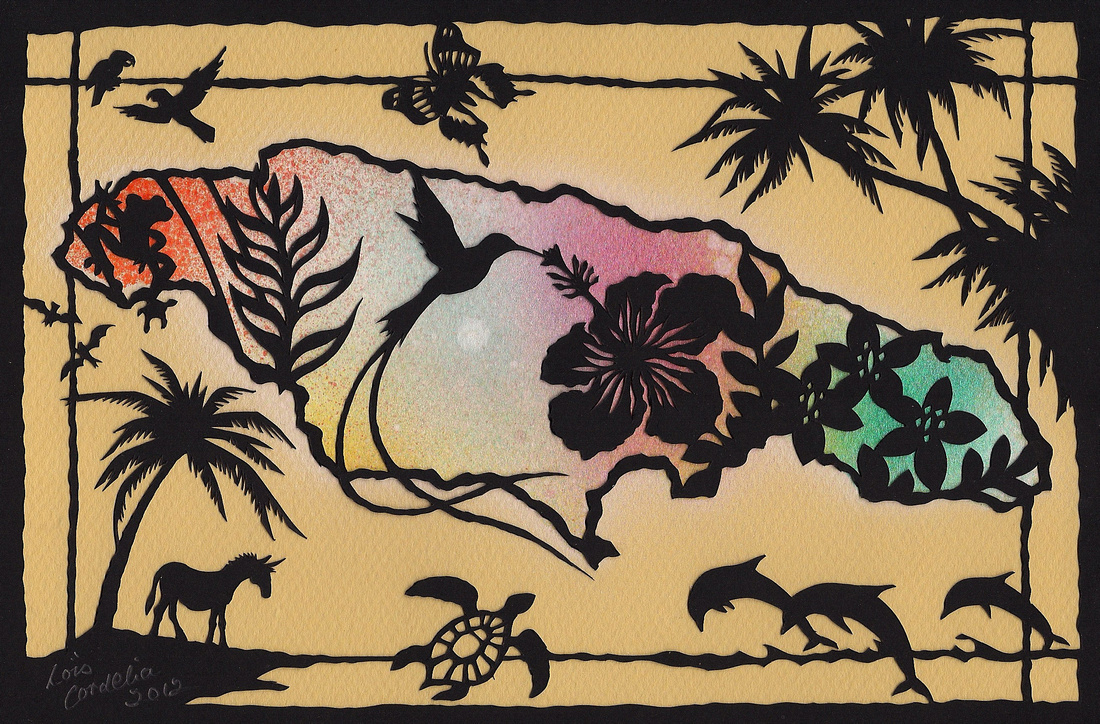 Cut-paper silhouette map of Jamaica, featuring some of its diverse flora and fauna, including the male Doctorbird (hummingbird) with its characteristic tail-streamers.

Price: £SOLD. In a private collection in London, England. 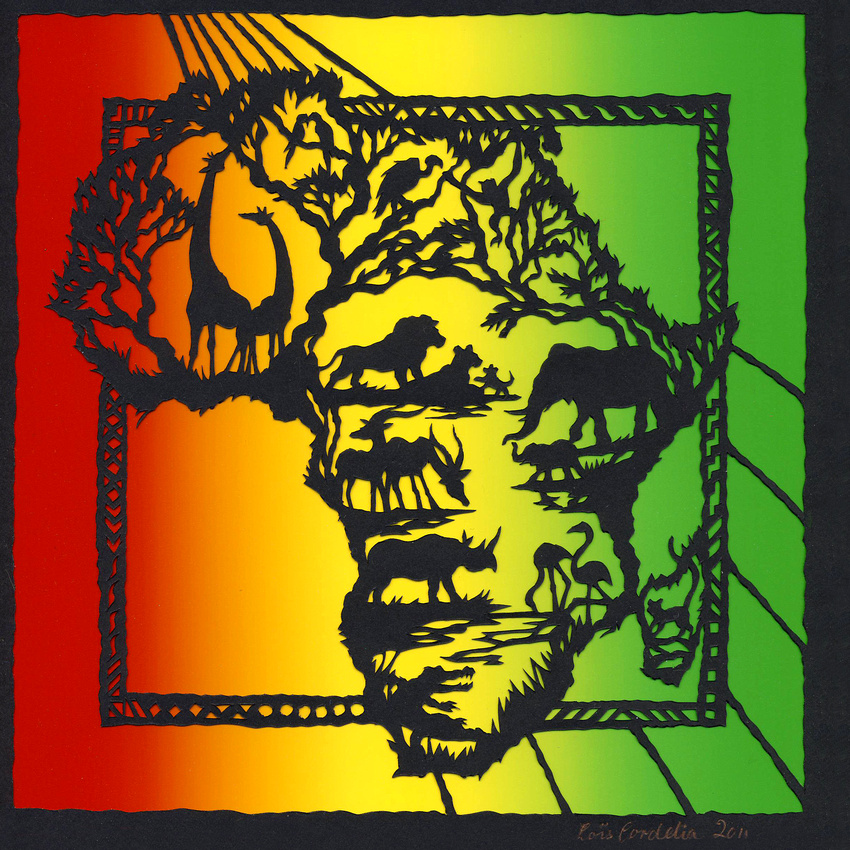 Price: £SOLD. In a private collection in Effingham, England.

"Vectis" (the Isle of Wight) - includes the text of a poem, as well as the well known landmarks of the Tennyson Memorial and the Needles. 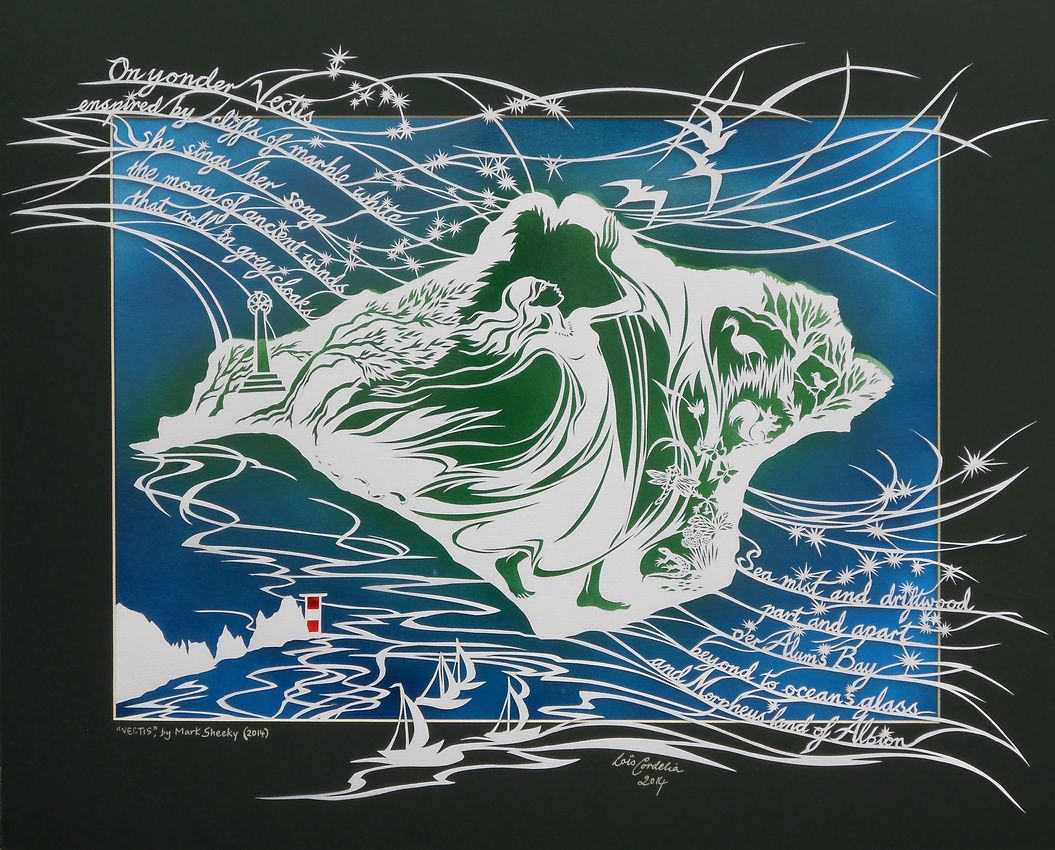 On yonder Vectis,
enspired by cliffs of marble white,
she sings her song,
the moan of ancient winds
that roll in grey cloaks.

Sea mist and driftwood.
Part and apart,
o'er Alum's Bay,
beyond to ocean's glass,
and Morpheus' land
of Albion.

The Wildlife of the British Isles 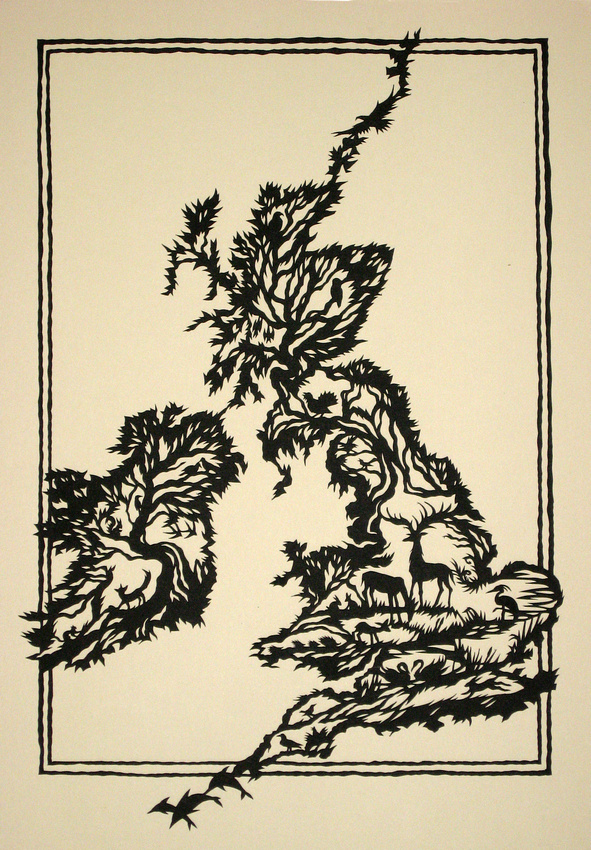 Price: £Not currently for sale. 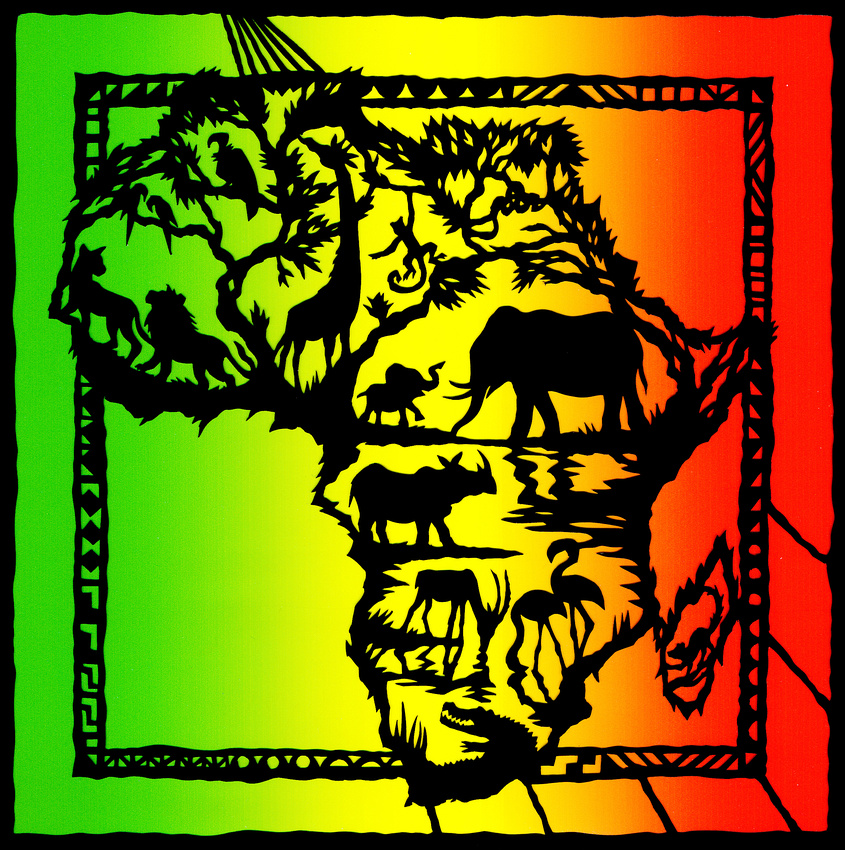 Mythology and Folklore of the British Isles 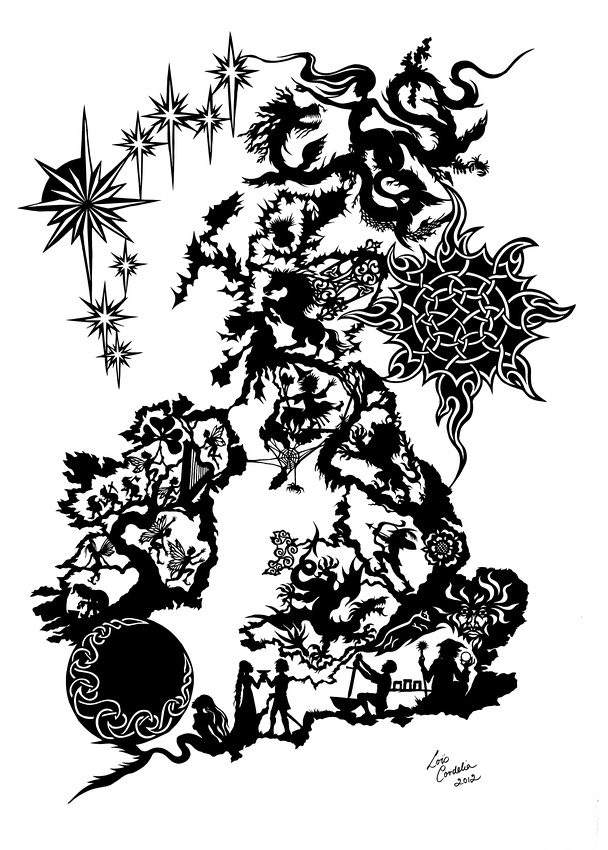 Mythology and Folklore of the British IslesMedium: Silhouette paper-cut. Cut by hand using a scalpel.

Design incorporating the following references to the mythology and folklore of the British Isles: 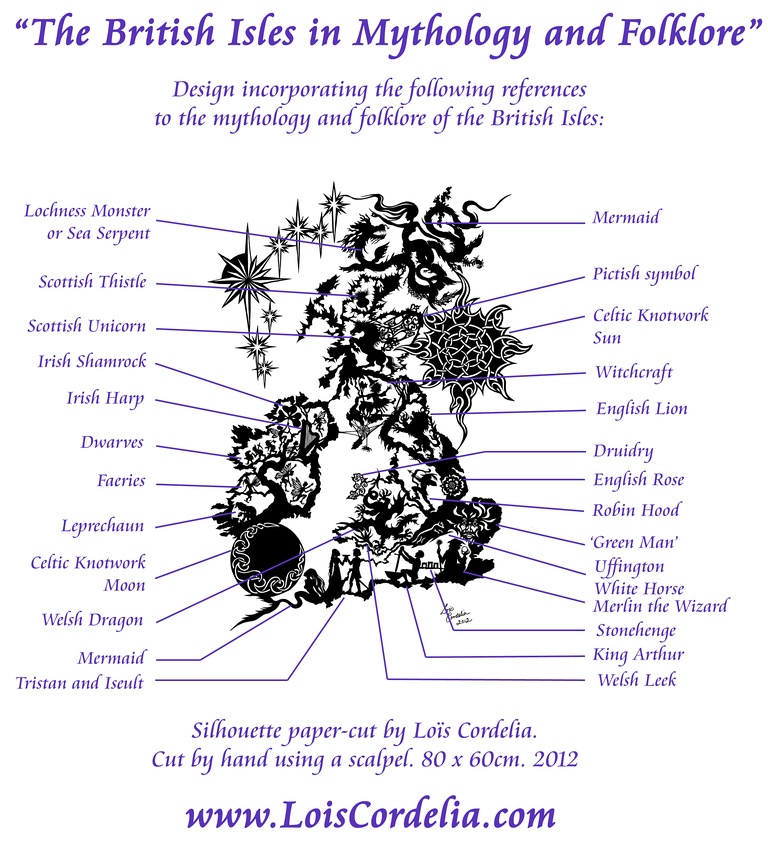 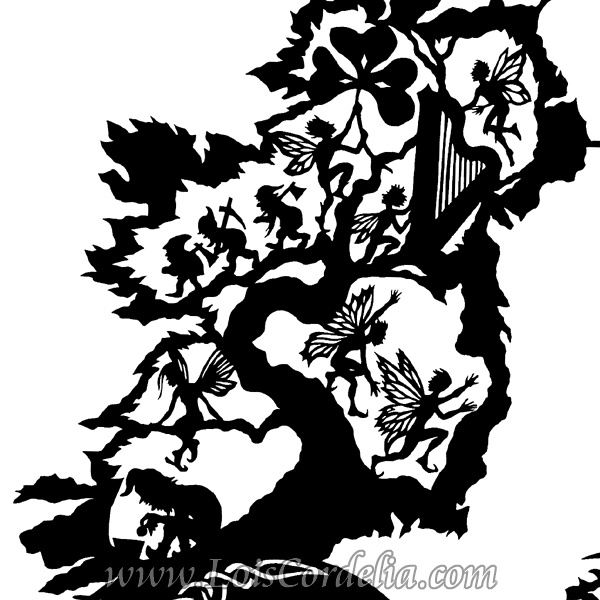 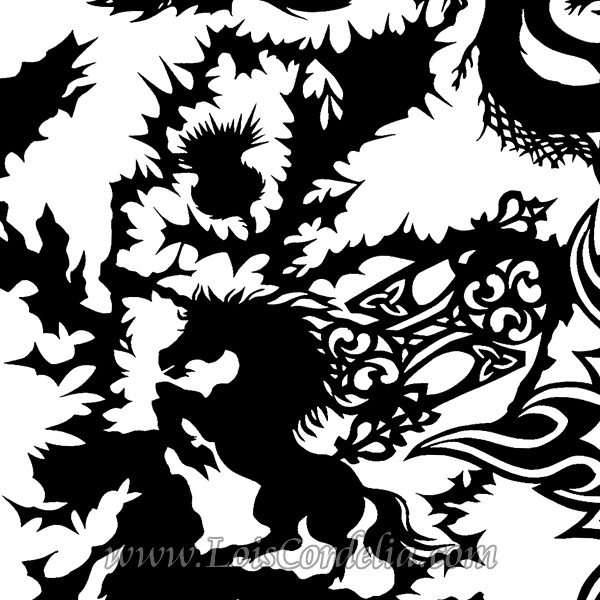 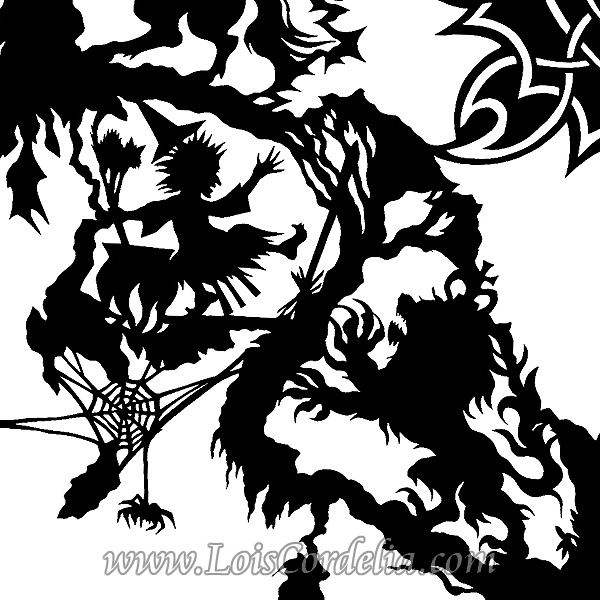 Details of "Mythology and Folklore of the British Isles": In the paper-cut medium, it is essential to "join up" the various islands of the British Isles, as otherwise the design would fall to pieces. Hence, the Isle of Mann is connected to the mainland by the strands of a cobweb, which gives Robin Hood something to aim his arrow at :-) 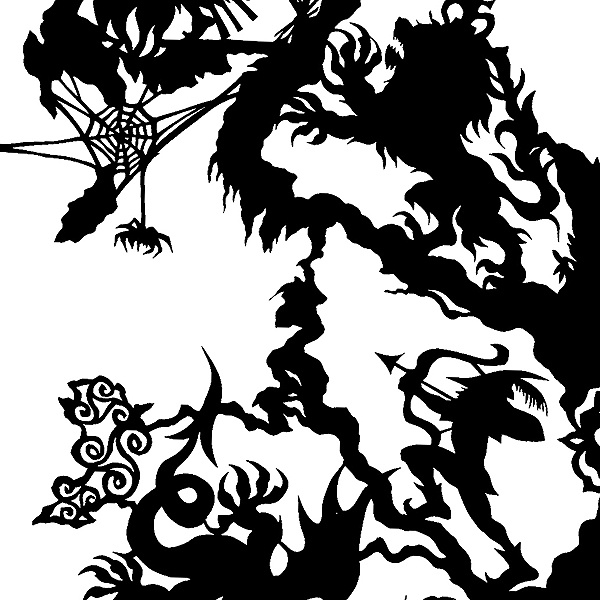 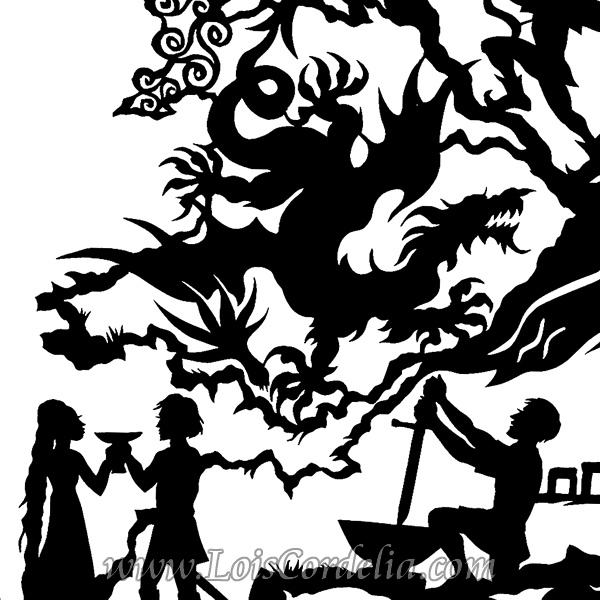 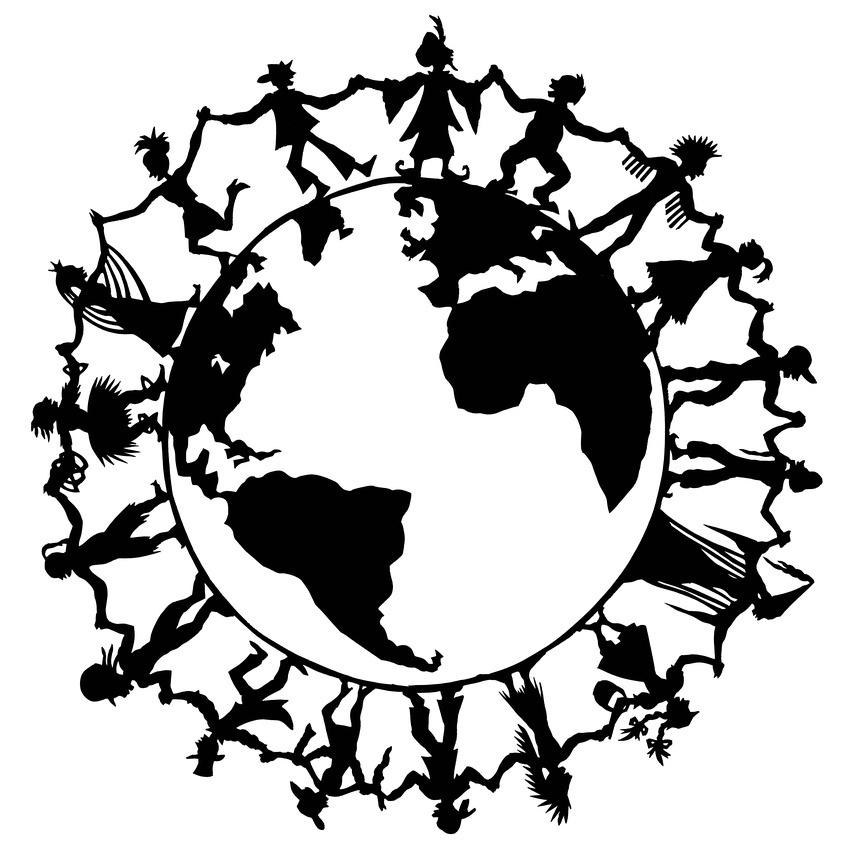 Comments:
Inspired by the the theme of multiculturalism... This silhouette
was great fun to cut out, and arguably includes a number of personal
jokes! ;-)

Price: £SOLD. In a private collection in Kesgrave, England.