The wait is over: the pigs are going to auction tomorrow! Thursday 22nd Sep 2016

The "Pigs Gone Wild" art trail, in aid of the St Elizabeth Hospice, formed a prominent feature across Ipswich over the Summer, raising smiles from many passers-by. The trail ran for ten weeks from 27th June until 2nd September 2016, bringing hundreds of thousands of visitors to Ipswich, and was shortly followed by an extremely successful and well attended "Ta Ta Trotters" farewell event at the Town Hall, Ipswich, on 10th and 11th September. Tomorrow, Thursday 22nd September, the pigs will finally go to auction to raise even more funds to support the amazing work of St Elizabeth Hospice.

Miss Pig-geswyk (below) welcomes your bids! :-) 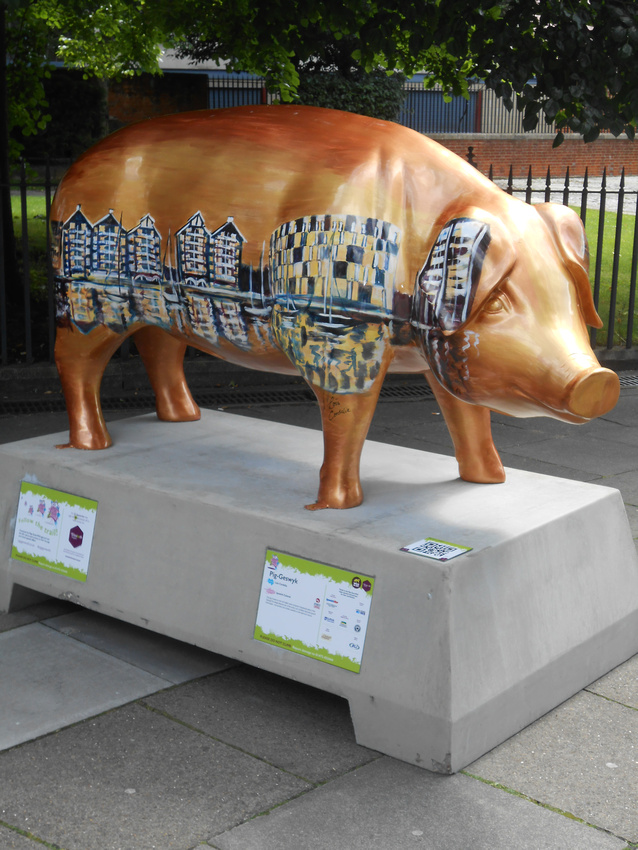 The much-anticipated Pigs Gone Wild auction will take place from 7.00 pm on Thursday 22nd September 2016, at Trinity Park, Ipswich, hosted by Clarke & Simpson. Funds raised from the sale of the pigs goes to support St Elizabeth Hospice's vital nursing care, supporting people living with progressive illnesses such as cancer, Parkinson's, or motor neurone disease. Lois Cordelia will also perform a special live speed-acrylics painting demonstration as part of the auction evening. If you can't make it to the auction, you can also bid online: https://www.the-saleroom.com/en-gb/auction-catalogues/clarke-and-simpson/catalogue-id-ibcla10084

Below: Lois Cordelia performs a live speed-painting demonstration, depicting the familiar sight of the Ancient House, Ipswich, as part of Ipswich Central's launch party for Pig-geswyk, June 2016. Pig-geswyk can be seen in the background. 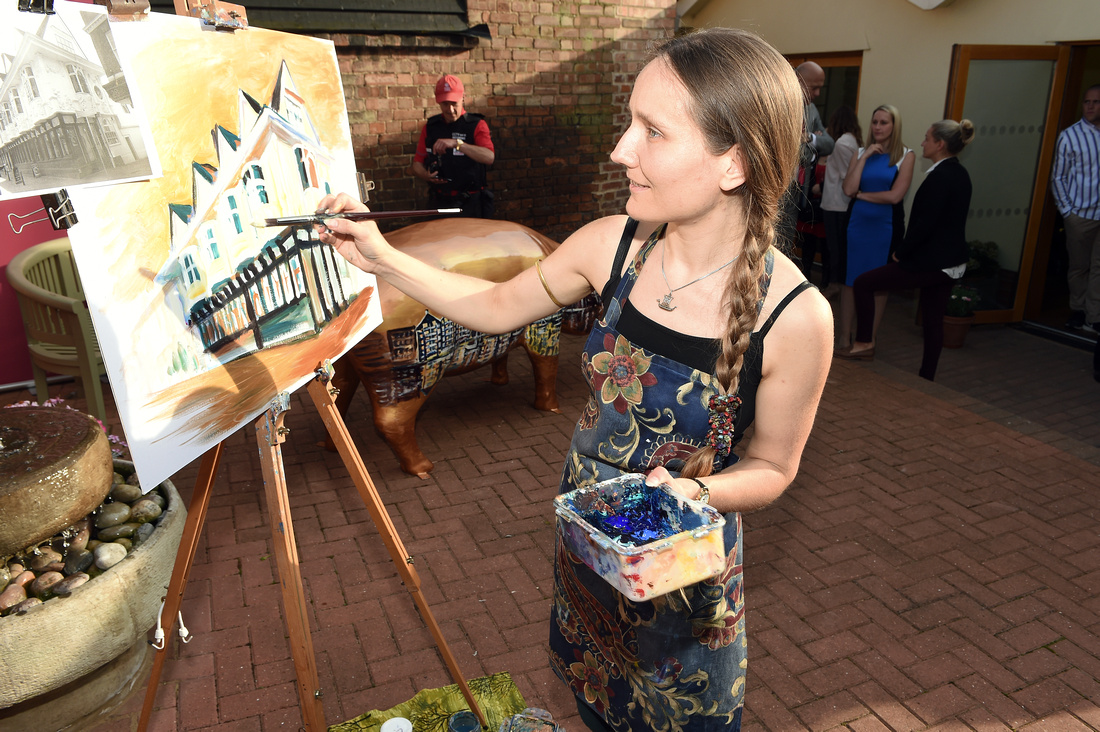 Piggy through the Looking-Glass

During the trail, Lois Cordelia's pig "Pig-geswyk" was located outside the Willis Coroon office building in the centre of Ipswich. Pig-geswyk was easy to spot, being a shimmering golden colour. This very vain little pig gazed admiringly at her own reflection in the dark glass exterior of the iconic Willis Coroon building for the whole of ten weeks. She welcomed visitors of all ages and loved having selfies taken! 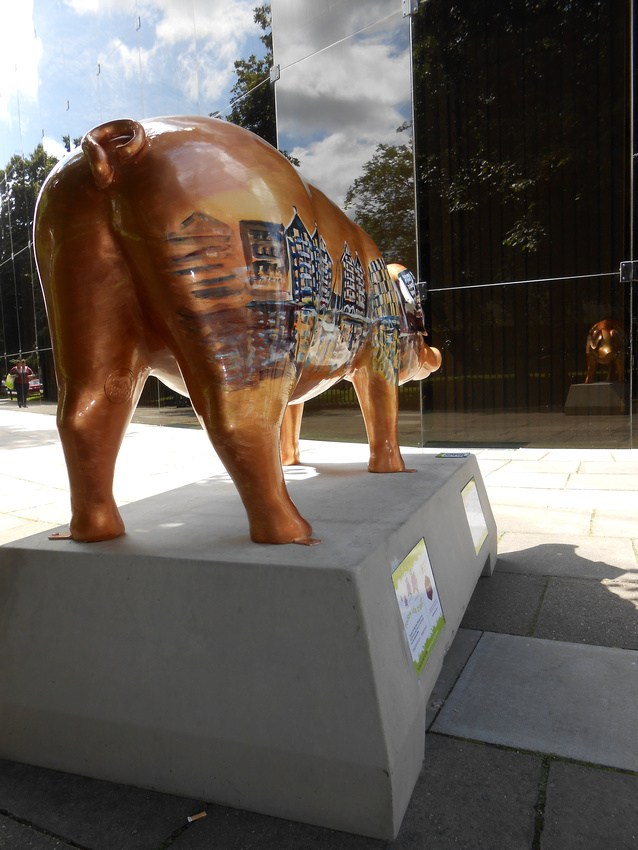 The name "Pig-geswyk" is a reference to the Medieval name of Lois Cordelia's hometown, Ipswich, "Gippeswyk" ('place' or 'market' of the River Gipping). The design features two of Lois' favourite Ipswich townscapes: the elegant, historic façade of the Elizabethan Christchurch Mansion on one side, and the stylish contemporary Ipswich Waterfront (including the UCS Waterfront building and the marina) on the other. The design has been generously sponsored by Ipswich Central, as it fits perfectly with their ethos of working to ensure a strong and prosperous future for Ipswich town centre, through promoting its history and heritage, but also enhancing its contemporary image. 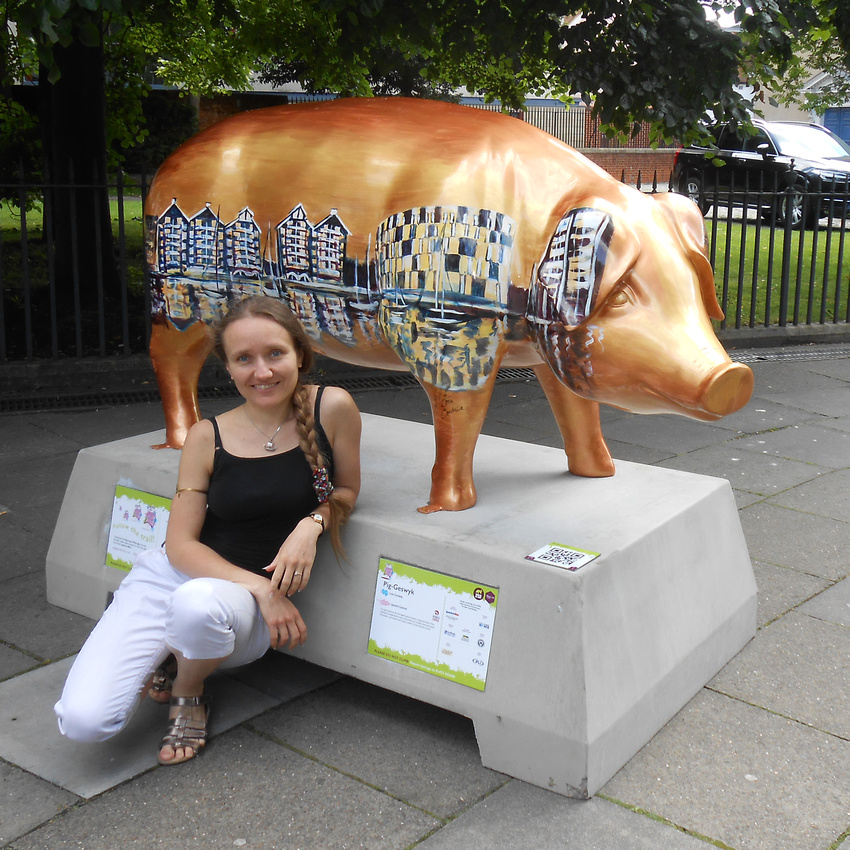 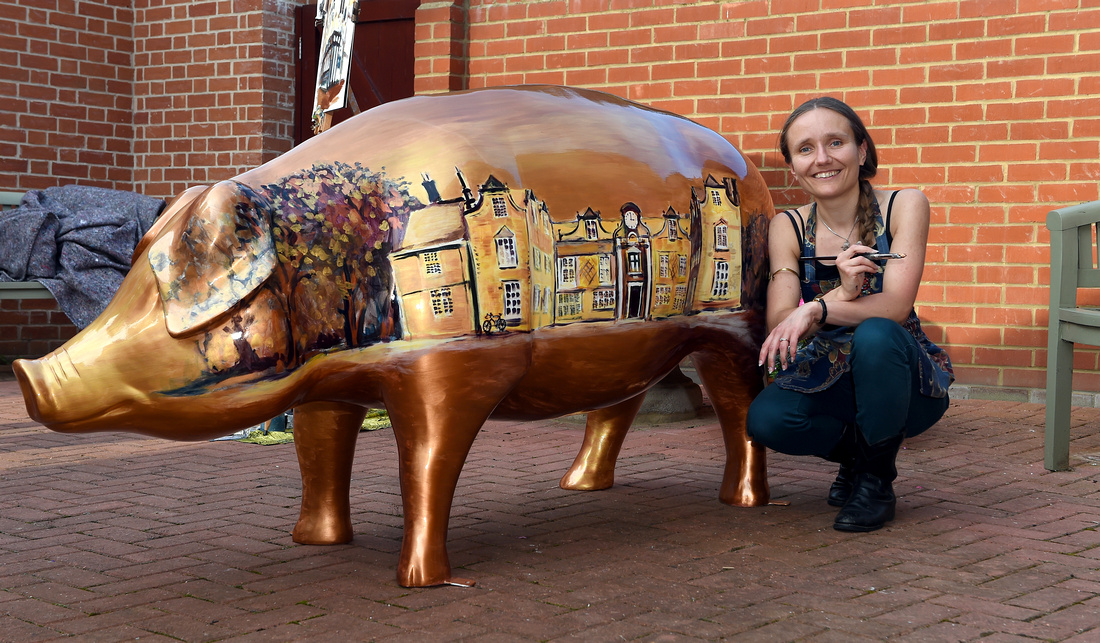 "A Brush with a Pig" - the Story of Pig-geswyk, in video and timelapse

Lois painted her pig as part of a public live art demo, on the 18th and 19th of May 2016, welcoming dozens of visitors of all ages while she painted and talked about her pig design. The live painting demo was kindly hosted Anna Matthews and her team at La Tour Cycle Cafe, located in Tower Street, in the heart of Ipswich town centre.

Video credits: DaveBulow Photography
Below: 2 minute video - "A Brush with a Pig - in Timelapse"

Timelapse: A Brush with a Pig

Below: 5 Minute video - "A Brush with a Pig" - the story of Pig-geswyk

A Brush with a Pig - The Story of Pig-geswyk

Below: A brief glimpse of work in progress, adding a subtle reference to the La Tour Cycle Cafe :-) Film footage by Dave Bulow Photography, May 2016.

Painting a Bicycle leaning against the Christchurch Mansion