Duct tape and cable-ties might seem an unlikely choice of artist's materials, but Ipswich-based artist Lois Cordelia is using these utilitarian fix-alls to sculpt a series of imaginative miniature figures to adorn a trio of giant yellow ducks for the sixth annual Grand Norwich Duck Race on the afternoon of Sunday 27th August 2017.

The duck race, which floats from St George's Bridge to St Fye's Bridge, Norwich, is not only a fun event for all ages, but raises vital funds and awareness for Break children's charity and also benefits local community groups, companies and individuals. The race is also an exciting visual spectacle, as no two ducks are alike. Each duck is painted or otherwise decorated and transformed by an artist (#ducktransformation), and then sponsored by a company to take part in the race.

Lois Cordelia offered to transform three giant ducks for Break. All the ducks were generously delivered to the artists by Prospect Handling Ltd in large boxes sealed with Duck Tape (the high quality Duck brand of duct tape, available in a wide range of colours and patterns). This inspired Lois to set herself the challenge of sculpting with duct tape onto the three ducks. 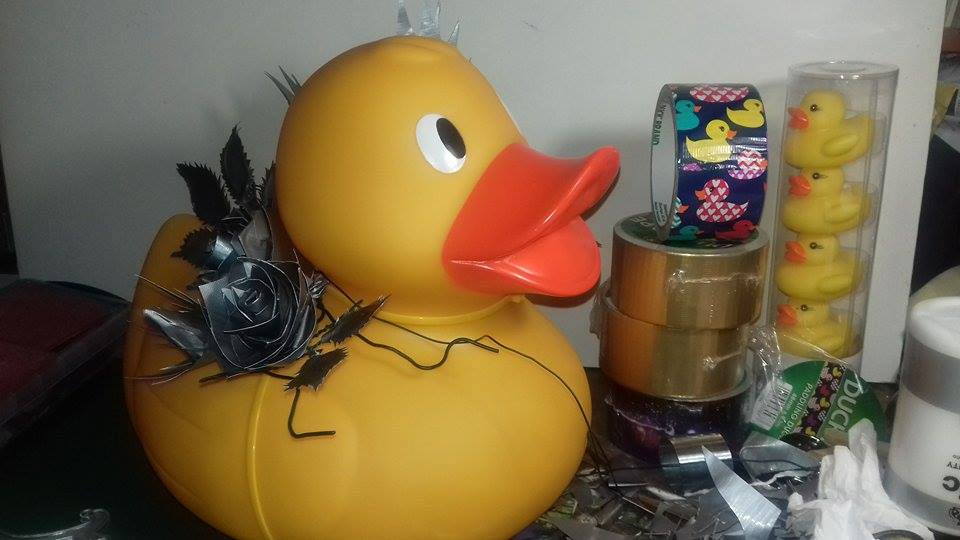 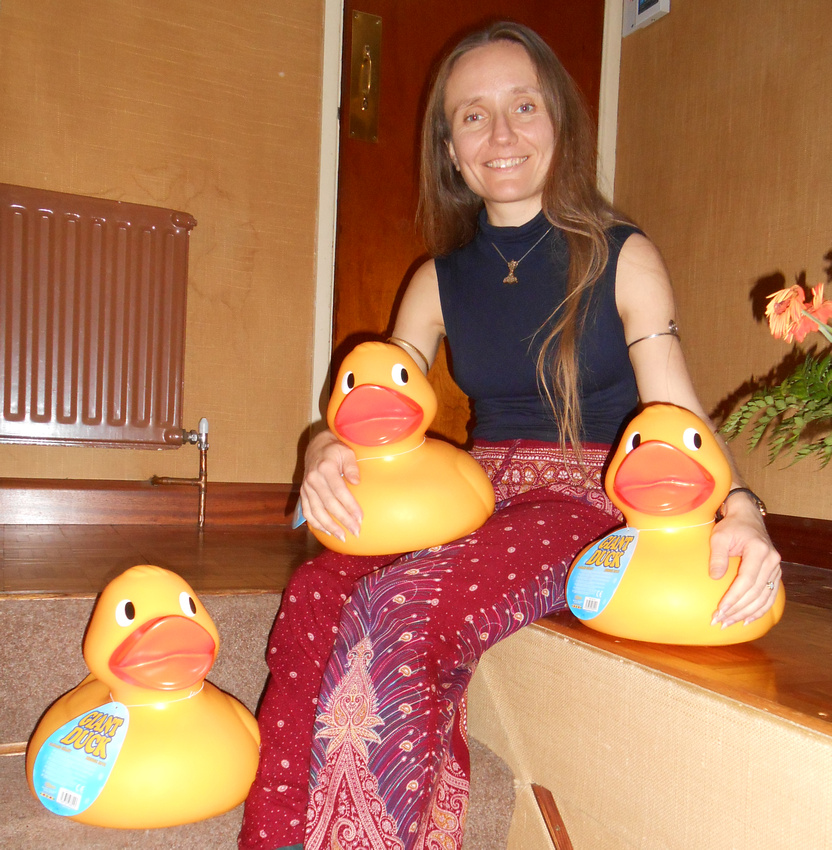 Duct tape is widely known for its superhero ability to fix, create or seal almost anything. Technically, it is an adhesive tape made using rubber-based glue and durable duck cloth, a heavy duty, tightly woven cotton or linen fabric, also known as duck canvas. It is also intriguing etymologically: duct tape was originally called duck tape, the name being derived from the Dutch term doek, "linen canvas", though it became better known as duct tape, as it was used extensively in ductwork.

Each duck presented a number of structural challenges, including how to attach anything to the smooth surface, and how to make the sculptures lightweight, durable and - importantly - waterproof. Luckily, duct tape meets all of these criteria. After some trial and error, cable ties proved invaluable for attaching the sculptures to the ducks, and adding ballast preserved the ducks' stability, even when afloat.

Lois's interest in archery (reinforced by her partner Jason's expertise in this field) suggested the theme for the first duck, inspired also by the competitive spirit of the Duck Race itself: an archer-assassin who rides the duck while turning and shooting at the same time in the traditional style of Mongolian horse-back archery. It was a fun challenge to juxtapose such a war-like figure with a child's bath toy. Lois combined gold metallic and cosmic patterned Duck Tape to create the assassin's clothes, playfully adding a few other colours in the arrow fletchings. The pair of swords in his sash are made of chopped up cable ties, wrapped in more Duck Tape. Beware: this duck is determined to shoot down every other duck in the race! 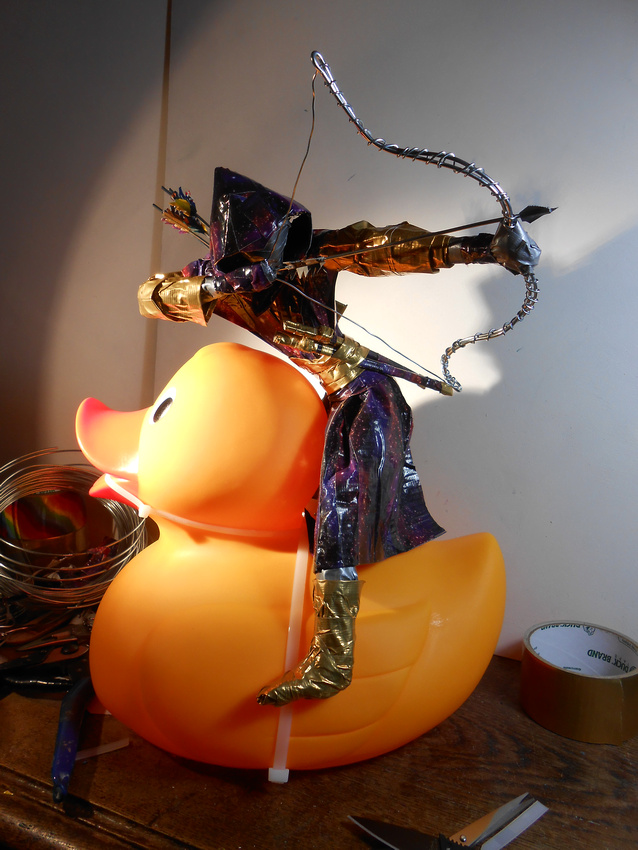 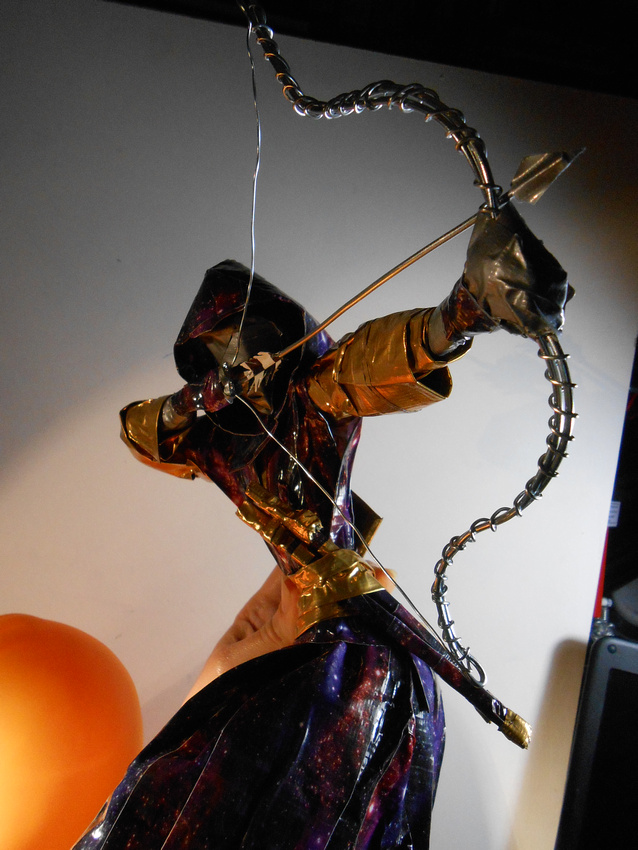 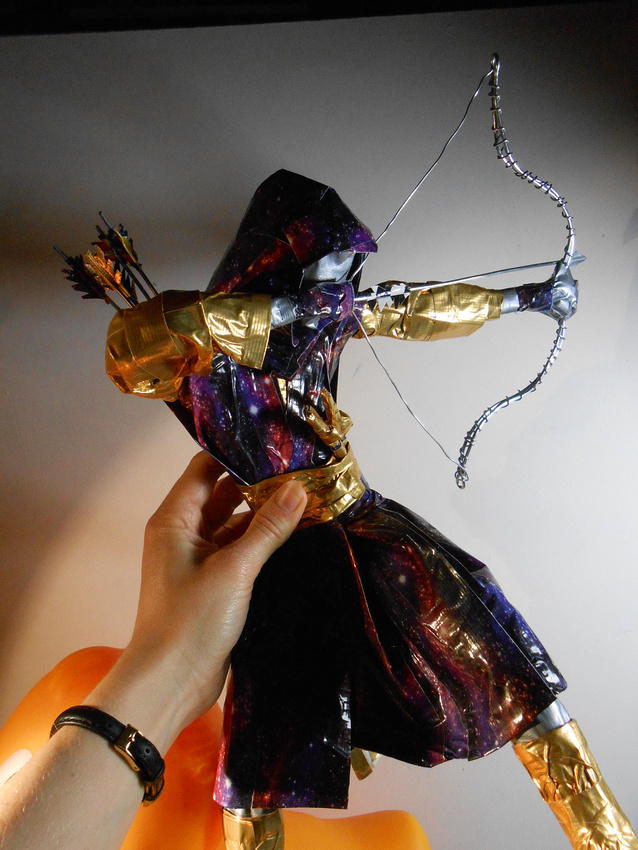 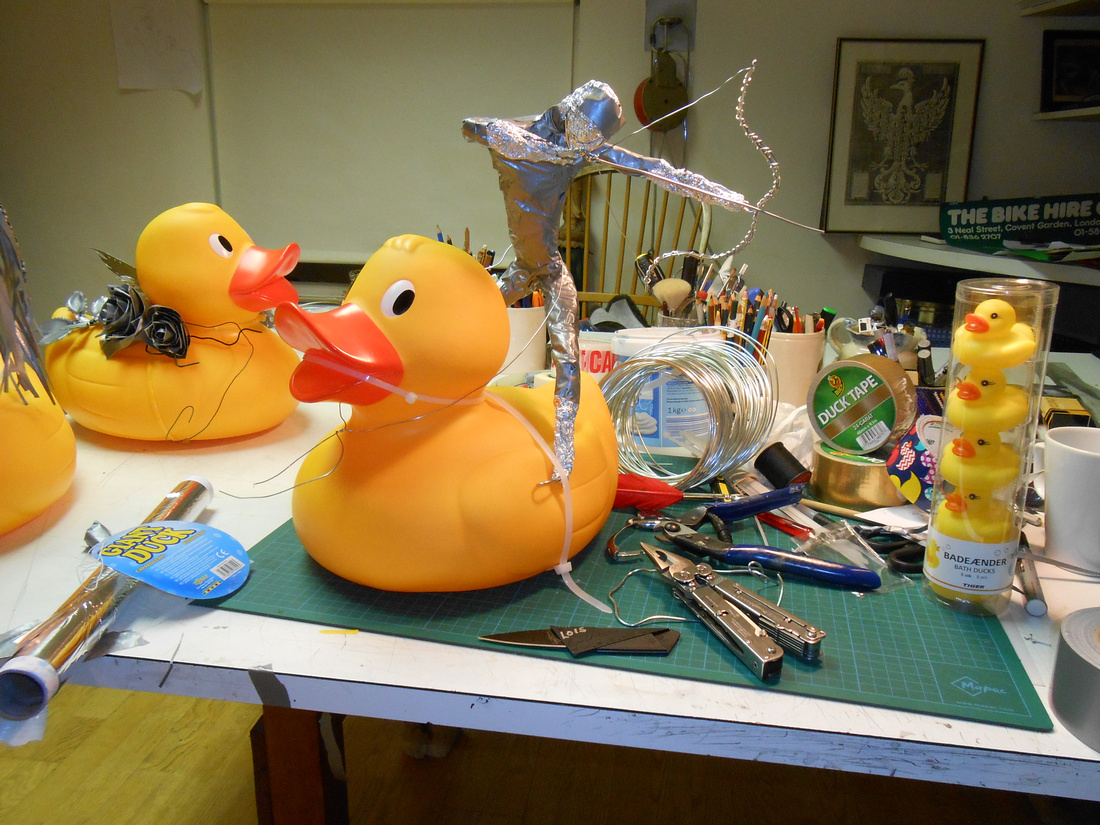 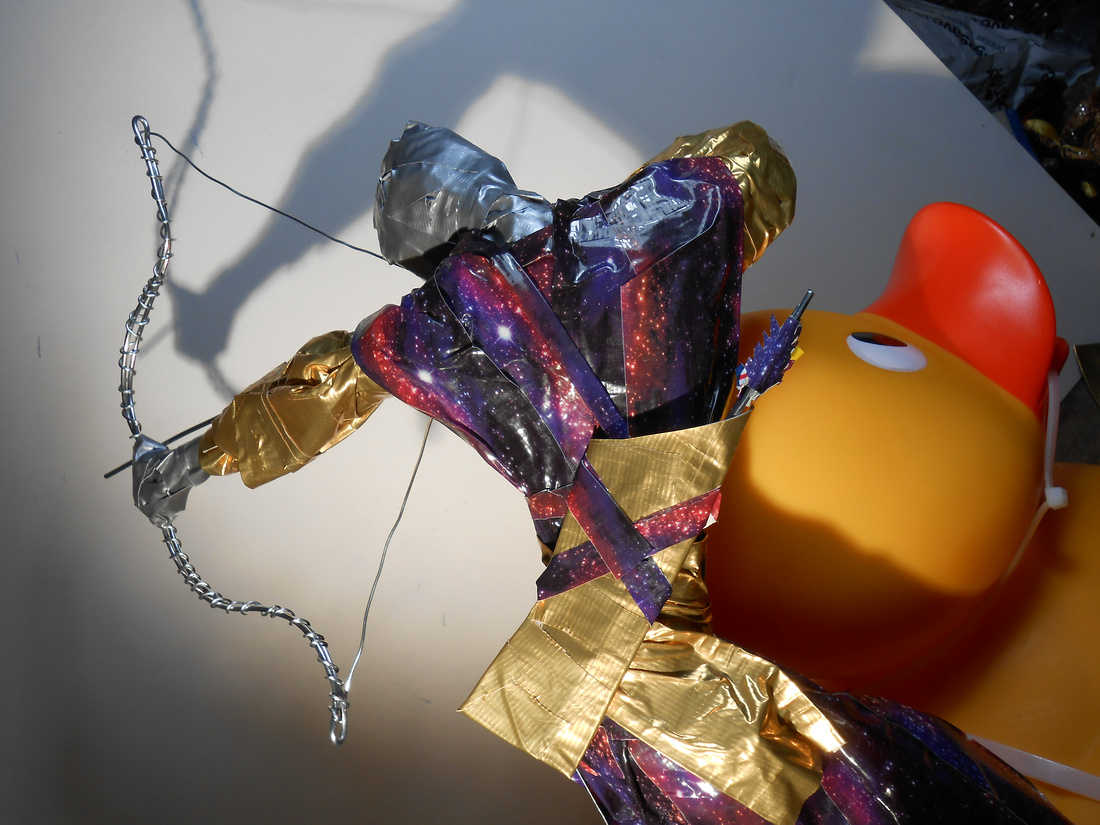 Lois was so impressed by the range of colours and patterns of duct tape manufactured by the Duck brand that these began to inspire sculpting ideas in themselves. Using brightly coloured rainbow, tie-dye and flowery patterns, Lois created a pair of chilled out bohemian figures, playing a guitar, in refreshing contrast to the martial imagery of the assassin. One or two additional sculpting materials were employed, including kitchen scourers, hair scrunchies and small metal charms and items of jewellery. All you need is Peace, Love and Duck Tape ;-) 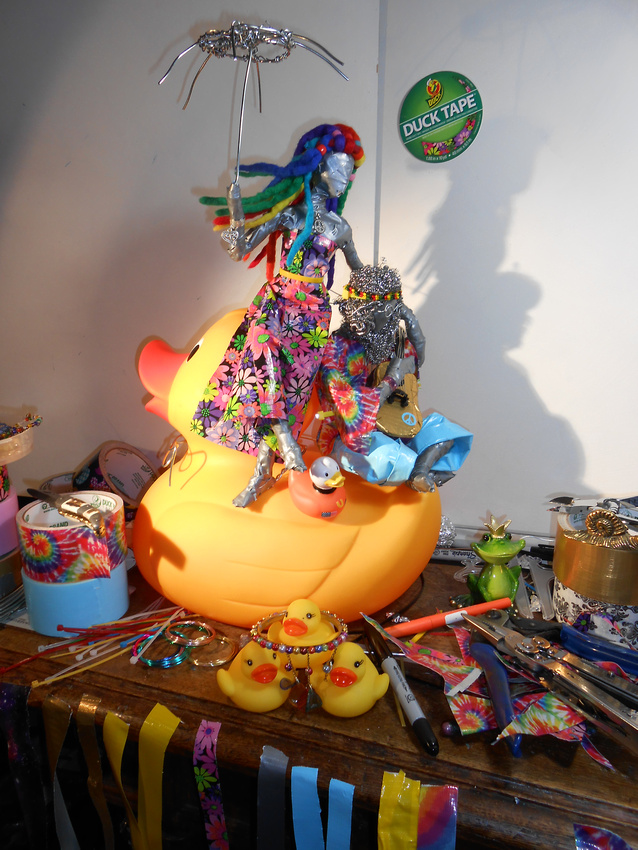 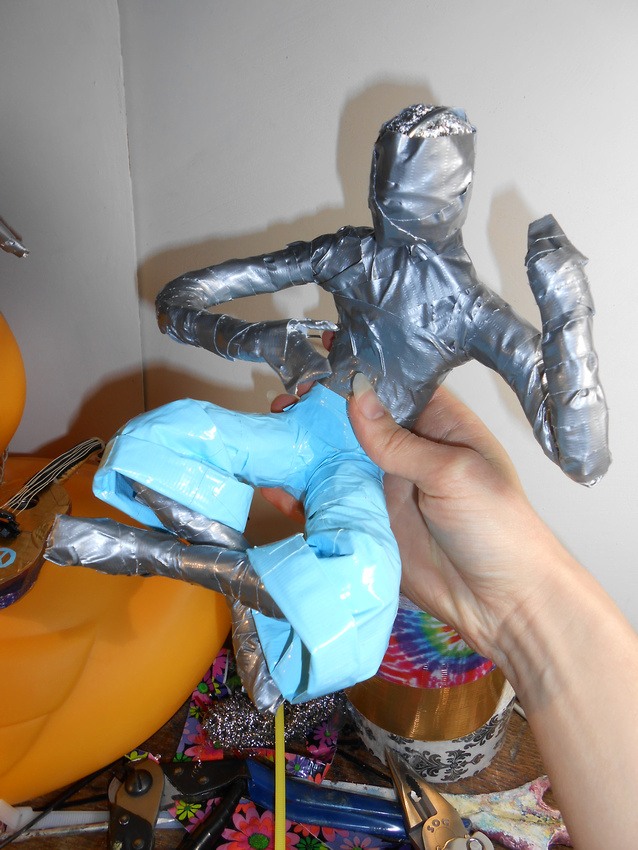 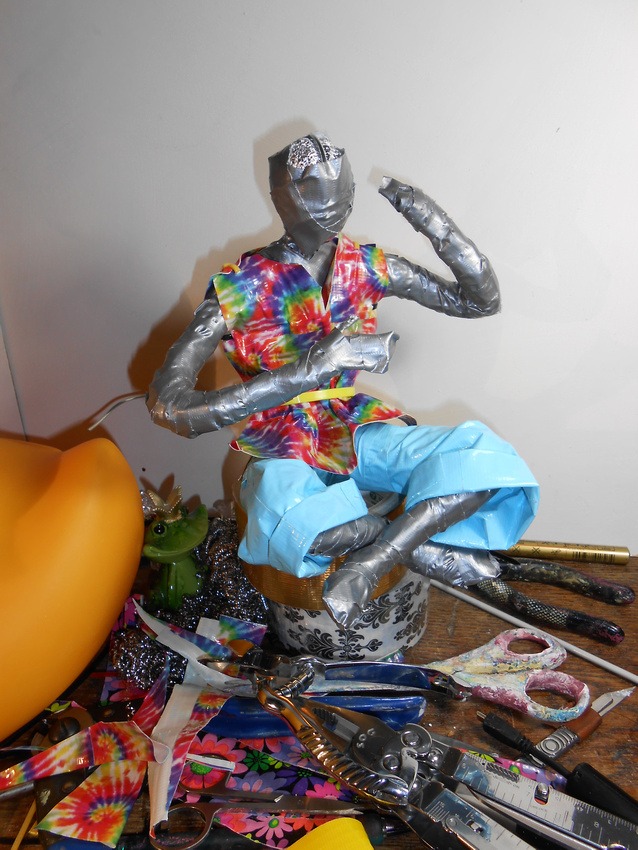 Lois's third duck (still in its early stages) will likely prove the most ambitious of the three, being a platform for a pair of ballet dancers, one held aloft by the other in a precarious balancing act. Yellow Duck Tape will turn Swan Lake into Duck Lake. Lois plans to incorporate the silver-grey roses that were her first venture into duct tape sculpture as part of the same duck design, to reinforce the romantic theme. 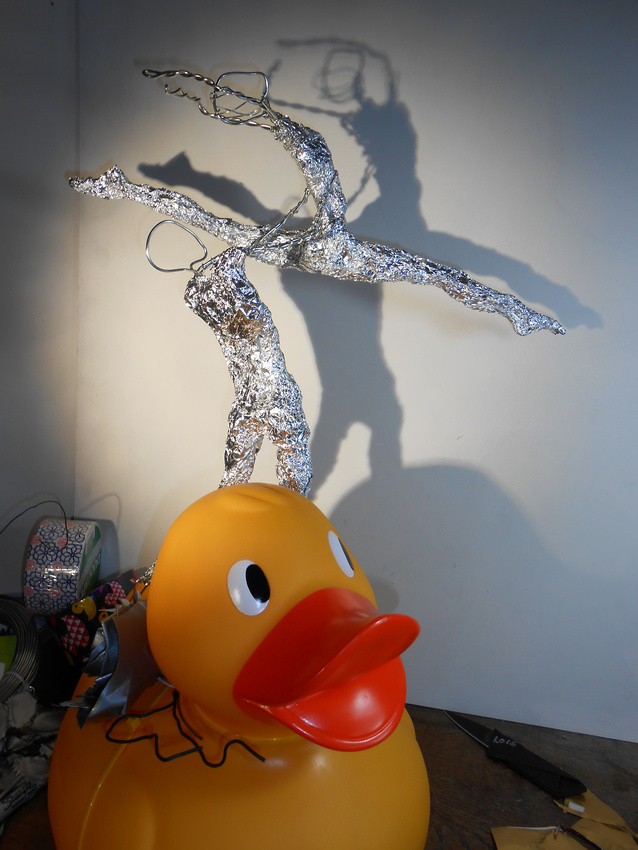 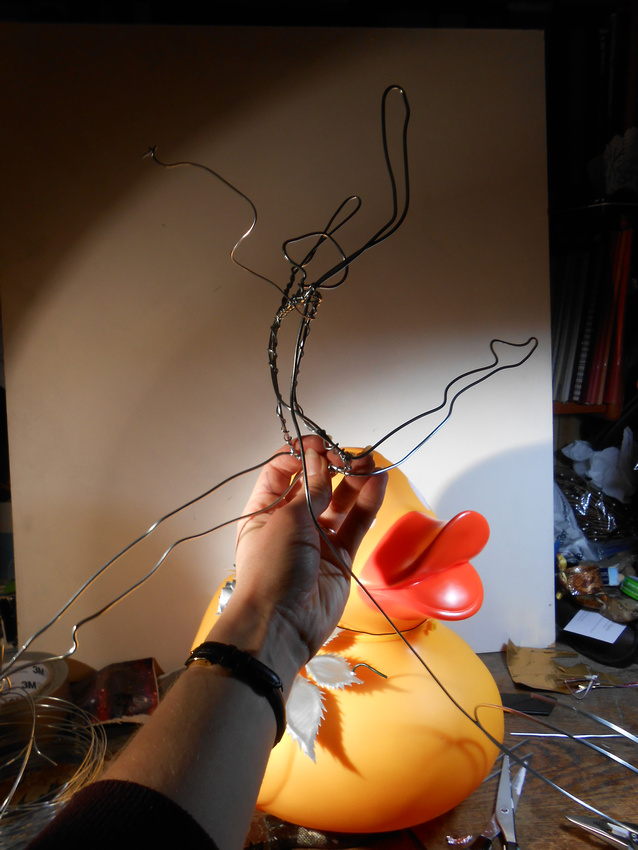 Lois Cordelia plans to travel to Norwich next month to present her trio of "Duck Tape Ducks" to Break in person, along with fellow Ipswich-based artist Anne-Marie Byrne, who is also creating three duck designs for the Grand Norwich Duck Race. Lois met and became friends with Anne-Marie after they both painted Pig designs for the Ipswich Pigs Gone Wild 2016 trail.

There is a multitude of collective nouns for ducks, depending on whether the birds are on water, on land, or in flight. A group of ducks on the water (as in the Grand Norwich Duck Race) may be correctly termed a "raft", "team", or "paddling" of ducks. If they are on land, they are known as a "brace", or "badling" (or "badelynge"), and in the air they are called a "flock". Other words include a "flush", "bunch", "dopping", "plump", "safe", "skein", "sord" and "string". It would appear that ducks have acquired one of the richest arrays of colective nouns in the English language. The Duck brand certainly lives up to this colourful array! 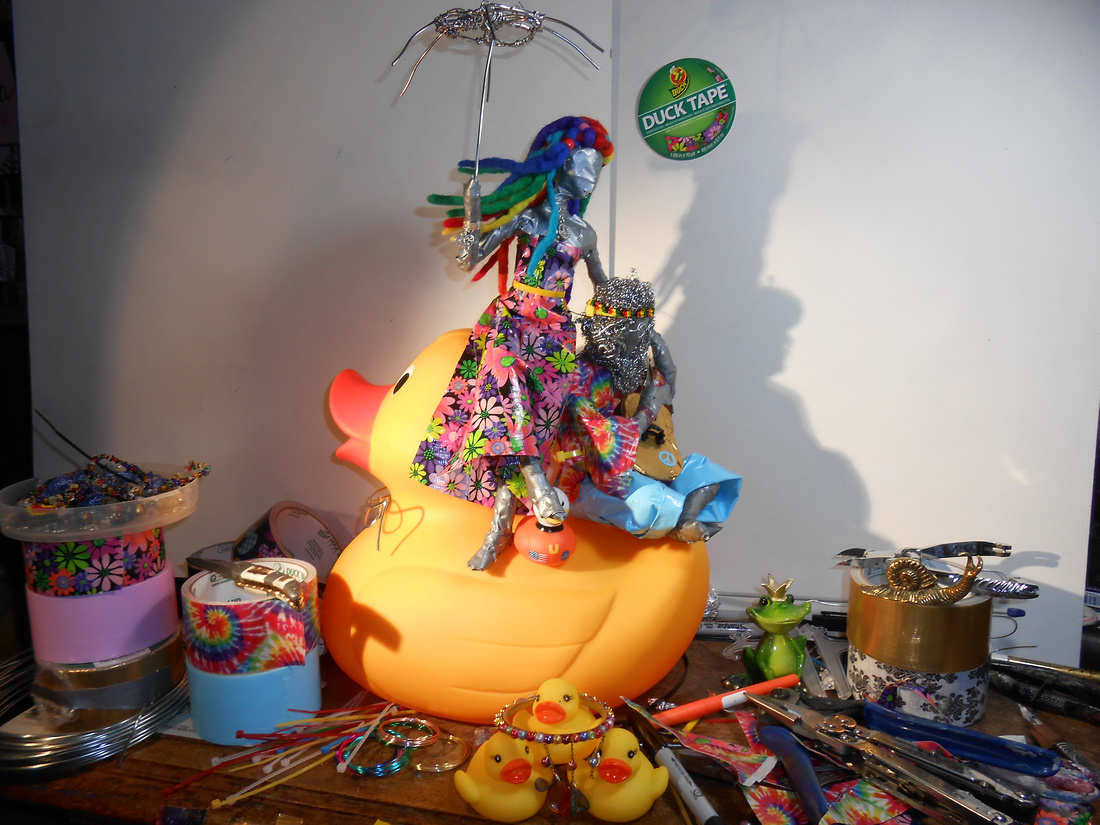 Sass(non-registered)
Beautiful work and great idea
This lass is so talented.
And totally quackery.
Will look forward to August