*** Bidding on all car bonnets is now live via the online auction page. ***

An unusual and diverse exhibition of designs painted onto rally car bonnets has opened to the public at the beautiful Winter Garden in the heart of Sheffield and runs throughout August 2018. The designs are all part of Bangers and Cash, the UK's first art road show banger car rally, which will travel more than a thousand miles from Sheffield to Monte Carlo in September 2018. This exciting venture will help to end youth homelessness by raising funds for Sheffield's youth housing charity Roundabout through the sale of each car bonnet at auction. Bidding is already live via the online auction page. Please support this great cause and bid generously for unique pieces of art. Roundabout helps to provide shelter, support and life skills to young people (aged 16-24).

Following the month long exhibition (throughout August 2018) at the Winter Garden, the 23 rally car teams will take on the 1219 mile Sheffield to Monte Carlo challenge in a car worth £650 or less - but each car bonnet has been hand-painted by an artist featuring a unique design and will hopefully raise far more than the value of the car itself for the Roundabout youth homelessness charity.

Ipswich artists Anne-Marie Byrne and Lois Cordelia are very excited to have had their designs selected for inclusion in the art car rally. Anne-Marie and Lois both frequently paint designs for public art trails around the UK - they met and became friends through Pigs Gone Wild 2016 in Ipswich. Anne-Marie's rally car bonnet design is called Van Go (sponsored by Horbury Group) and features her delightful adaptation of Vincent van Gogh's swirling style of painting to evoke the excitement of the car rally.

Lois's design Imagination Can Take You Anywhere takes its inspiration from a famous quotation of Albert Einstein: "Logic will get you from A to B. Imagination will take you everywhere", and celebrates themes of travel, transport and progress - at whatever speed - conveyed via dramatic silhouettes on a brightly coloured backdrop. 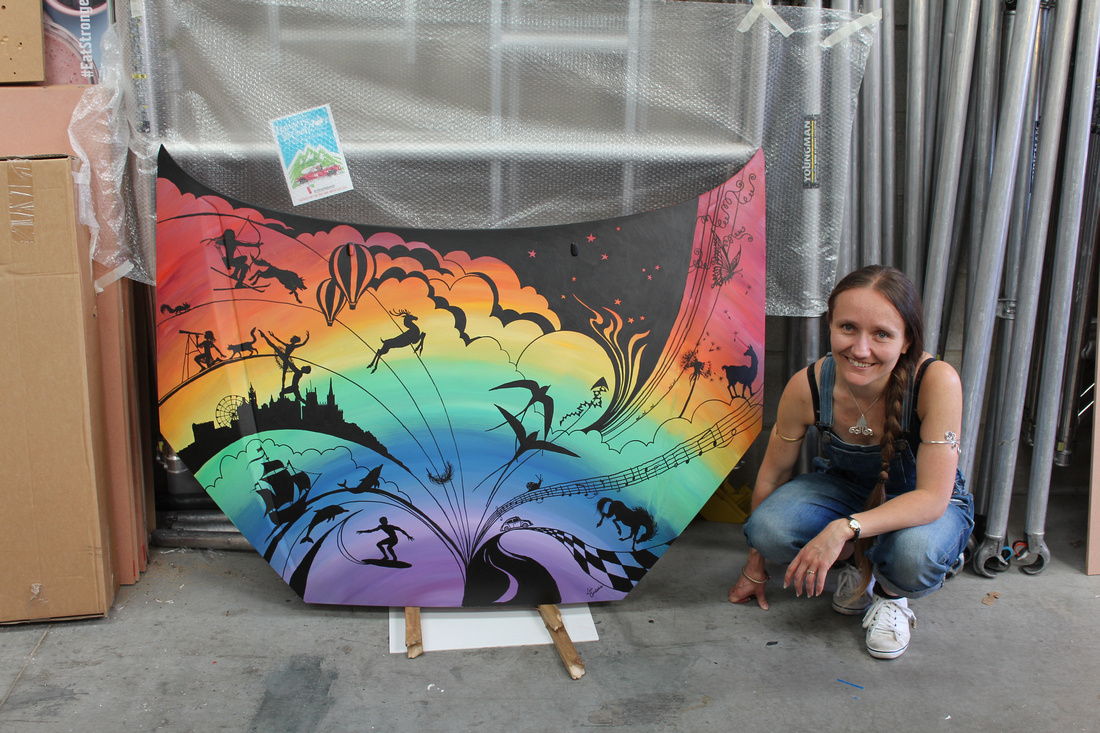 Above: Lois Cordelia with Imagination Can Take You Anywhere, sponsored by Signs Express Sheffield, painted on the car bonnet of a red Ford Focus. June 2018.

Below: Anne-Marie Byrne (Amberdreams) at work on the collosal car bonnet of a Jaguar, painting her design Van Go, sponsored by Horbury Group. June 2018. 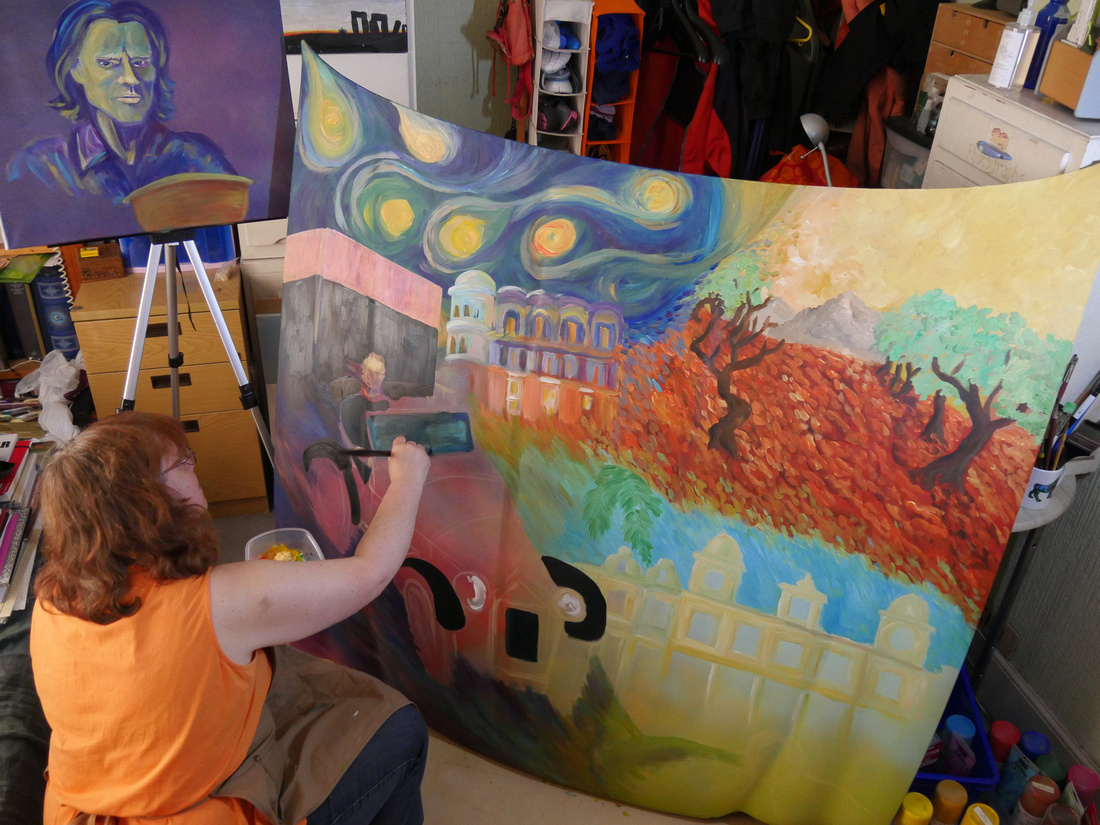 Lois's rally car bonnet has been generously sponsored by Steve and Carol Morris of Signs Express Sheffield, whose granddaughter helped choose the design from among those shortlisted. Lois has a reputation for being a 'speed-painter', working with a big brush, sweeping strokes and unusual canvases (often three-dimensional), but this is her first time to paint a design onto a rally car: speed-painting takes on a new meaning! But progress is more important than speed - especially in ending youth homelessness - and so the design depicts not only swift movers and high flyers but also those who move slowly and modestly, like the snail, or those who travel via the power of imagination and curiosity, like an astronomer observing the distant stars.

Lois travelled to Sheffield in late June 2018, working live in situ at Signs Express Sheffield, to paint her design onto the bonnet of a red Ford Focus, ready for inclusion in the rally. She began by sanding down the original surface of the car bonnet, coating it with primer, and then painting an imaginative array of dramatic silhouettes on a rich rainbow coloured background. The silhouettes include figures in motion, animals, cars, musical notation (a reference to Herbie's Theme Tune), and the Sheffield skyline, all drawn and painted by hand.

Below: beginning to sand down the original painted surface of the Ford Focus bonnet 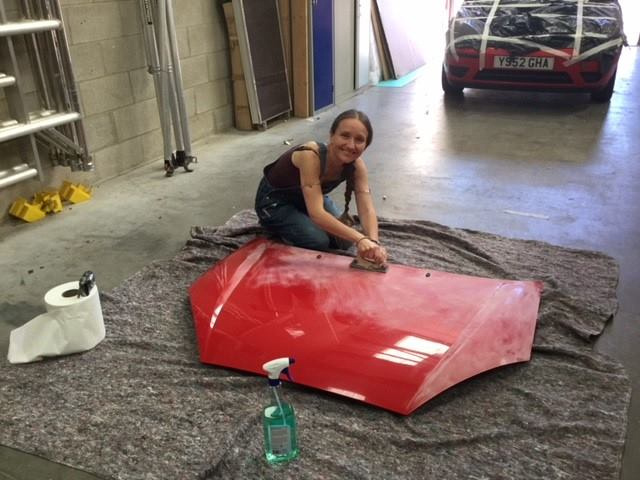 Below: Painting the background rainbow in sweeping brushstrokes 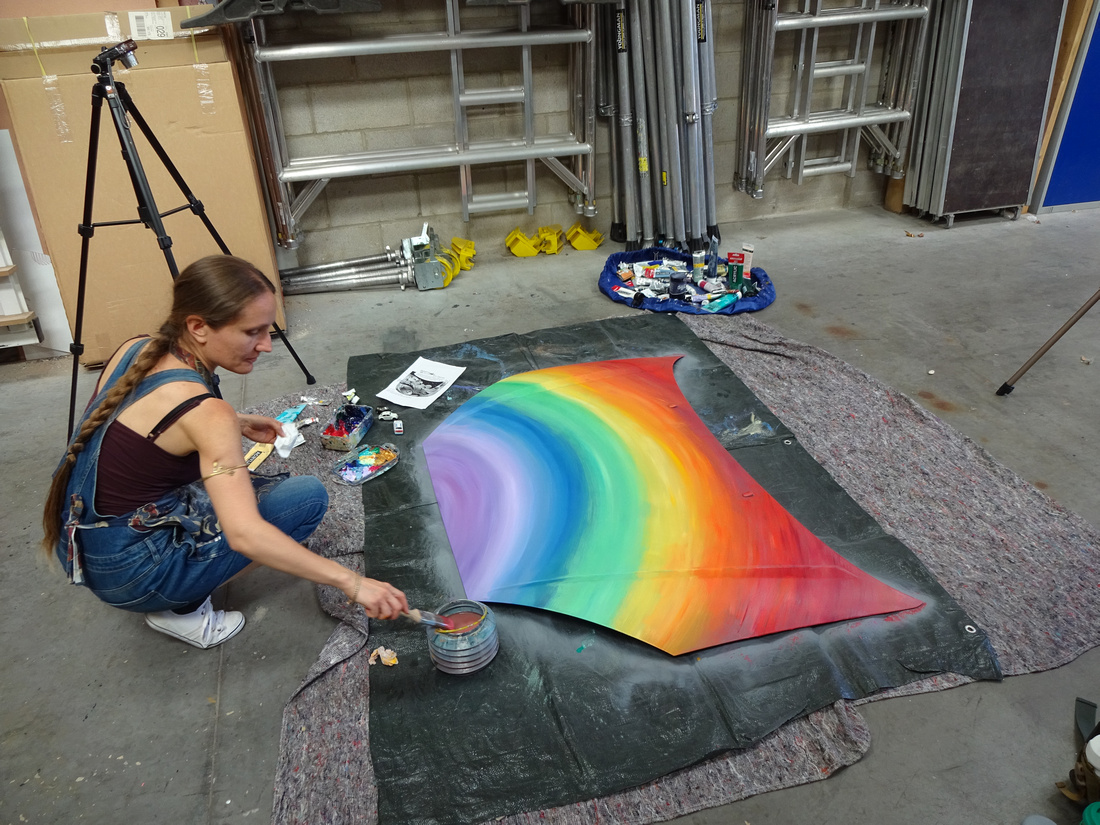 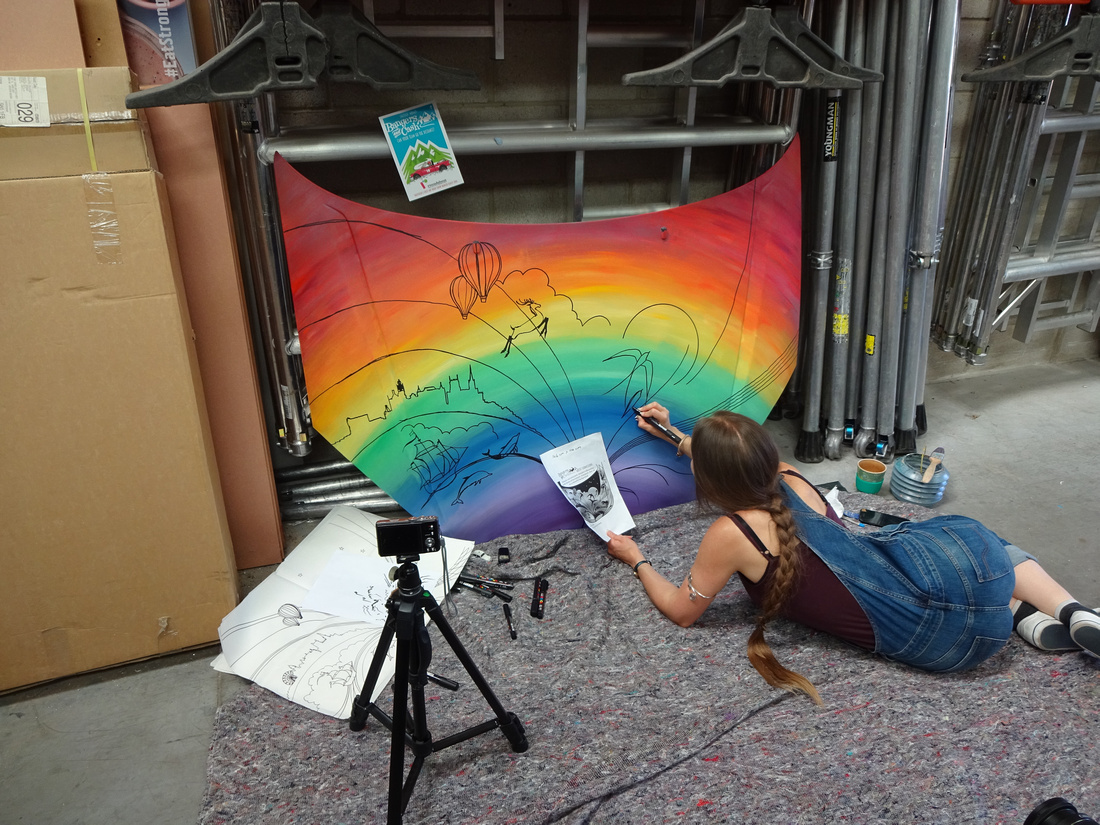 Above: All the silhouettes were drawn by hand and then filled in with black paint. 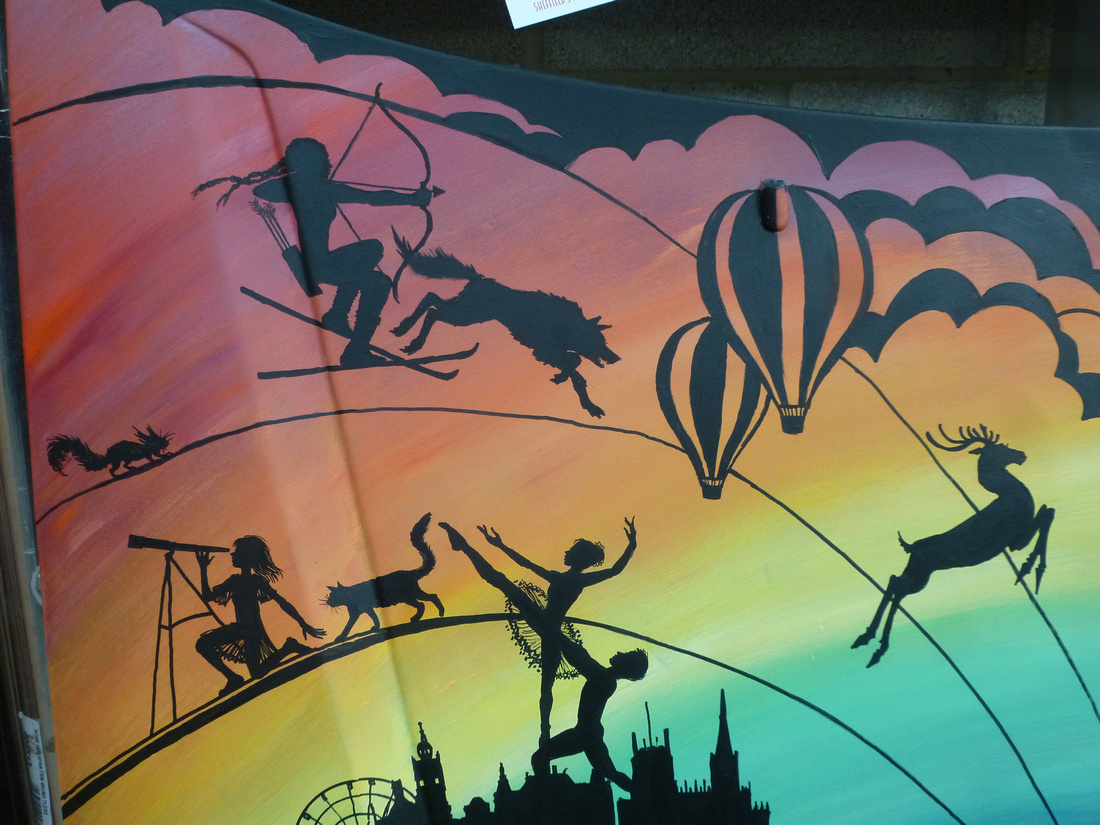 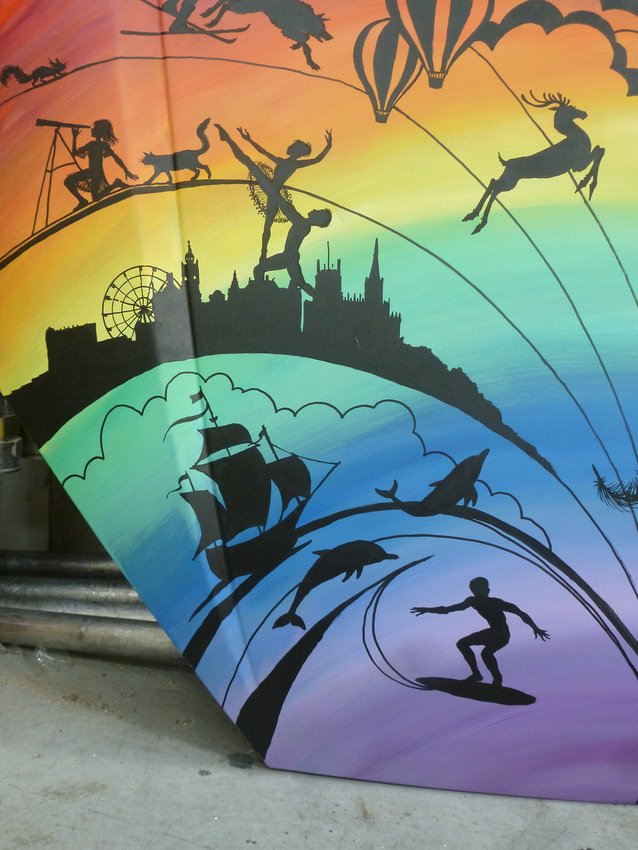 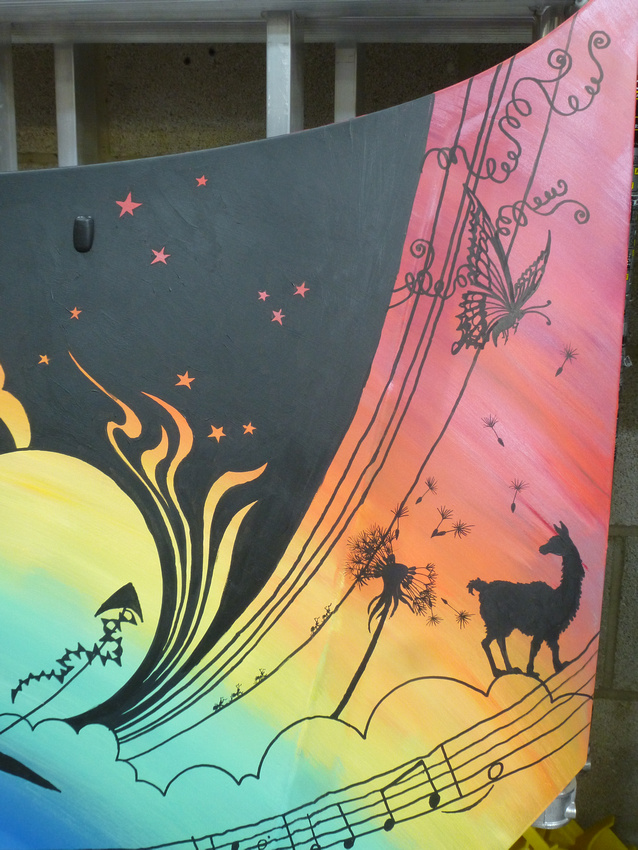 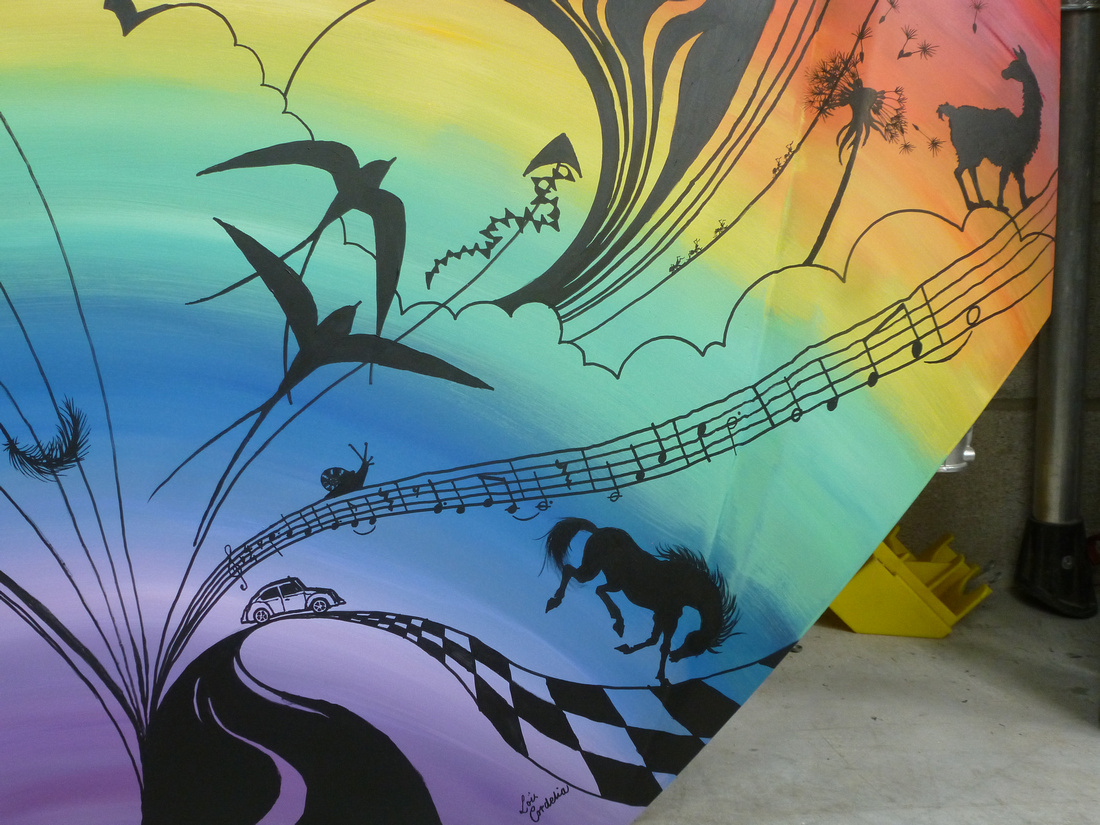 Below: with the whole team at Signs Express Sheffield. Special thanks to Steve Morris. June 2018. 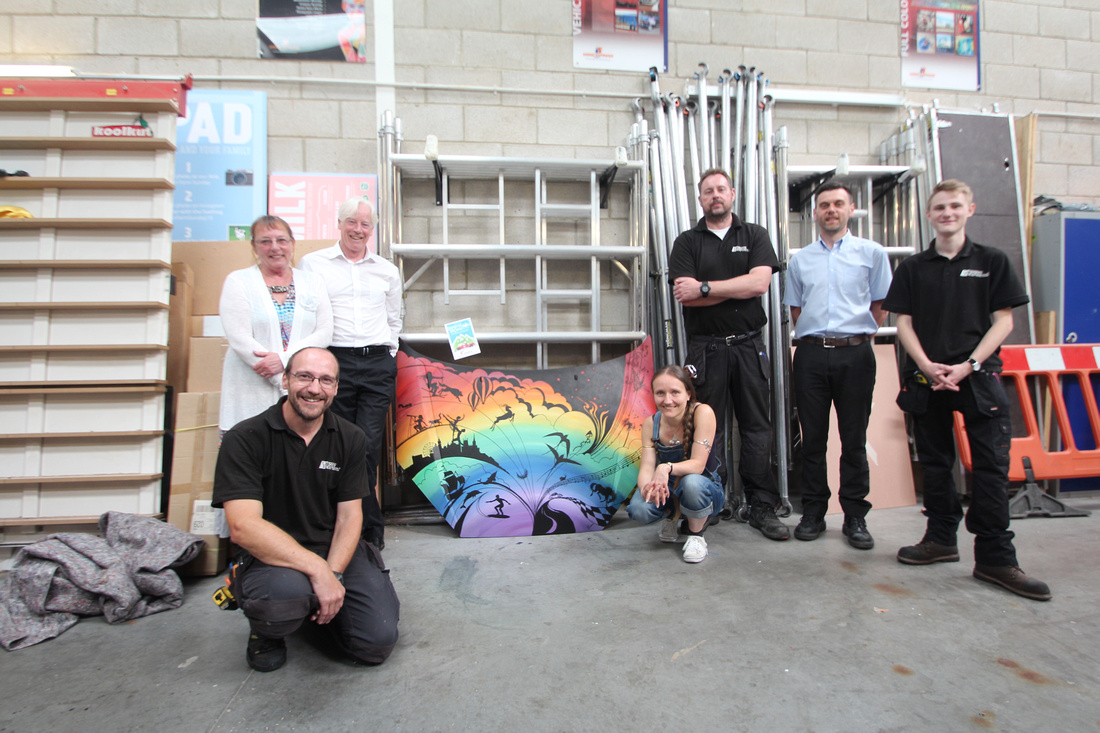 The Bangers and Cash car rally will start in Sheffield on Friday 21st September 2018, with the first overnight stop being in Brussels, Belgium. On Saturday 22nd September, the teams will travel from Brussels via Luxembourg and Strasbourg, to Lucerne, Switzerland. On Sunday 23rd, the rally continues via St Gotthard's Pass, Lugano, Lake Como, and Monza to Milan, Italy. On Monday 24th September, the teams will reach the grand finale of Monte Carlo itself, before going on to celebrate and enjoy a well-earned rest in Nice, France. On Tuesday 25th, the teams will head home towards Sheffield.

Bidding for all the car bonnets is now live via the online auction page, to raise funds for Roundabout and help end youth homelessness. Don't miss your chance to purchase a unique piece of artwork on an unusual canvas that will be a talking point for years to come. Happy Bidding! :-)

Competition
There will also be a competition running during the exhibition at the Winter Garden, asking the public to upload their favourite photos and selfies with the car bonnets to social media using the hashtag #BangersandCashComp. There will be a range of prizes (including several donated by some of the artists) on offer! 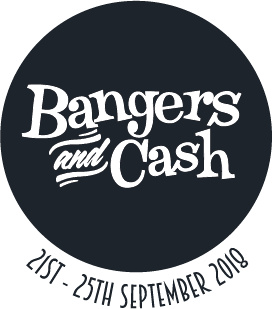 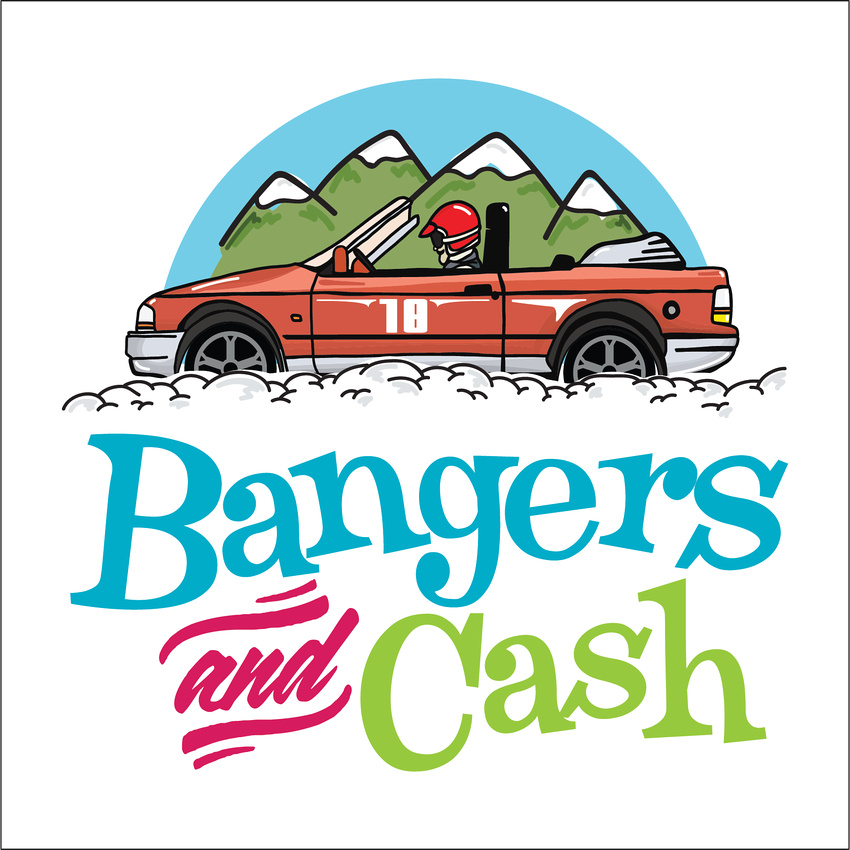 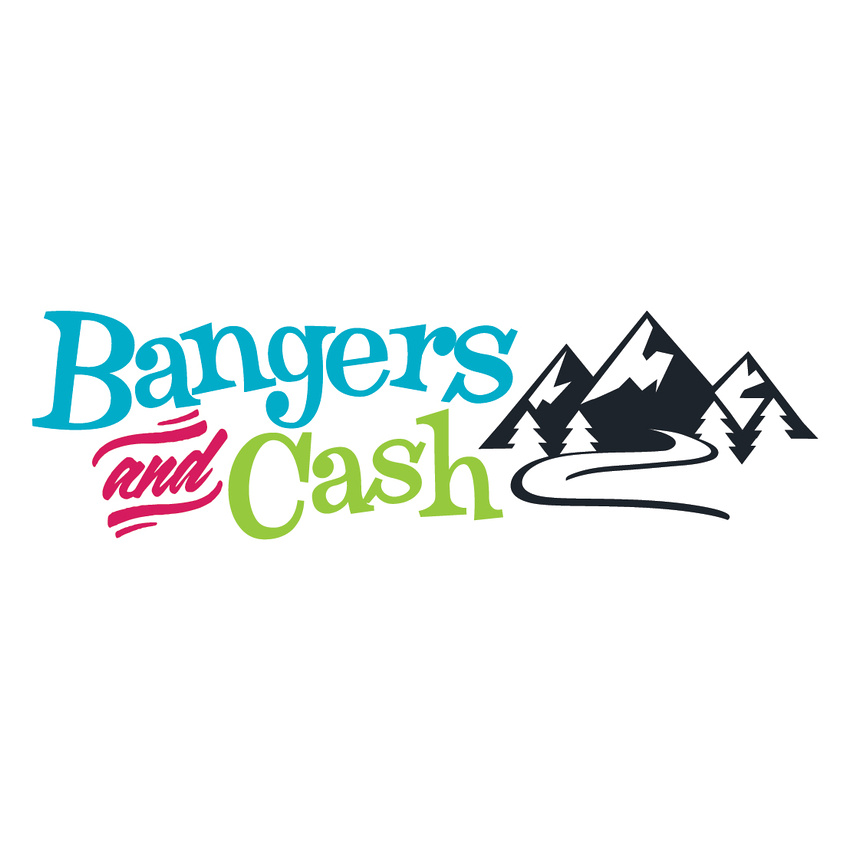