The Cutting Edge - Paper Art with a Scalpel

Have you ever tried paper-cutting? Chances are, at school, you cut out paper snowflakes with scissors. Most of us have tried it at some point. For me, it has become one of my favourite creative mediums. Balancing the blade’s precision with energetic free-flowing lines, I cut designs out of paper using a scalpel. My scalpel is a genuine surgical instrument, except that it is non-sterile – for the record, I don’t do brain-surgery in my spare time.

The History of Paper-Cutting

Paper-cutting as an artform is more widespread that you might imagine. The word ‘paper’ comes of course from ‘papyrus’, the forerunner of paper. In China, paper was found to be a much cheaper alternative to silk, which had previously been used for writing and drawing. The art of paper-cutting began in the royal courts, using scissors. An anecdote tells of a young Chinese man who was so skilled that he could cut animals and figures out of a piece of paper hidden up his sleeve. In Japan, a similar tradition of paper-cutting is called Kiri-e (“paper-cut”), usually cut with a knife. Kiri-gami is a mixture of paper-cutting and paper-folding, half-way between kiri-e and origami. In India we find Sanjhi or Devasthanakala, for the decoration of temples. No preliminary sketching – the paper is simply cut, using fine nail-scissors, to depict scenes from mythology, folklore and daily life. What particularly intrigued me was the custom of laying a paper-cut onto the surface of water, sprinkling powdered pigment over it, then carefully removing the paper, to achieve a magical, translucent, though short-lived effect.

Back to Europe. Since approximately the fifteenth century, Scherenschnitte (“scissor-cuts”), silhouettes, Valentines cards and love letters were popular in Germany and Switzerland. From here, paper-cutting was taken to colonial America in the seventeenth century. Poland also has paper-cuts, called Wycinanki (vee-chee-non-kee), originally cut from tree-bark and leather by shepherds using shears. Birds and flowers are favourite motifs, often formed from several layers of brightly coloured paper. In Turkey, paper-cuts are known as Ka'ti, which are used for ornamental designs and calligraphic texts. Since the Middle Ages, the Jews created elaborate paper-cuts incorporating symbols, geometrical designs, Hebrew calligraphy and texts from the Scriptures. An anecdote tells of Rabbi Shem-Tov ben Yitzhak ben Ardutiel, whose ink dried up while he wrote in the year 1345, and so he resourcefully continued by cutting the letters out of the paper with scissors.

In Mexico, Papel Picado (“perforated paper”), cut out of coloured tissue paper, used for Day of the Dead celebrations, Christmas, Easter, weddings and other festivals. Small scissors are used, in addition to other cutting tools: chisels, hammers and punches. The finished paper-cuts are strung together as banners. 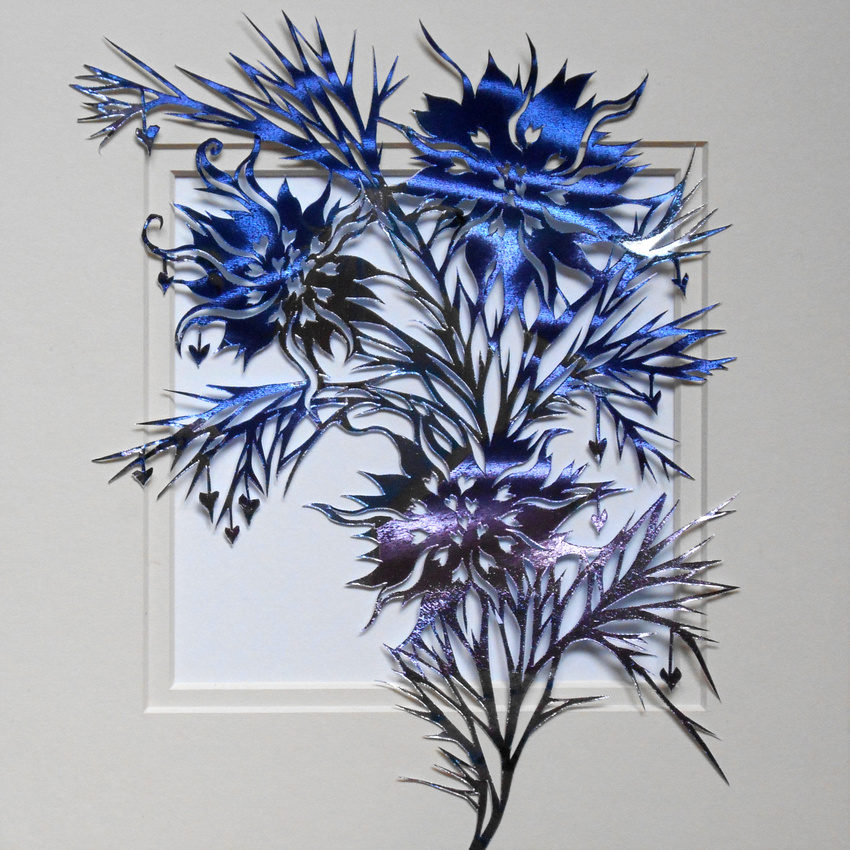 Paper as a Medium for Art

Paper fascinates me as a material, a medium, and a symbol. It is two-dimensional, but can be crumpled or folded into three. It can be patterned or plain, and of many different weights. Paper is fragile, easily torn, yet in relative terms it is strong. It is extremely versatile (think of books, newspapers, letters, gift wrap, loo roll, packaging, wallpaper, sketchbooks, the list goes on). Historically, for example in the War years, it was precious – today, it is a cheap, throw-away, indefinitely renewable resource. If at all, it represents a symbolic value, as in the case of tickets or bank notes.

But exploring paper as a medium in its own right, rather than simply a substrate or canvas, has inspired me to re-assess the value of a humble piece of paper. The challenge is to create something extraordinary out of something ordinary, taking time, precision and devotion.

I came to focus on paper-cutting as a medium largely as a result of working as a studio assistant to artist and author-illustrator Jan Pienkowski (born Warsaw, 1936), a number of whose books for children feature silhouette style illustrations, and many of which – in more recent years – I have cut out for him. I first went to visit Jan’s studio in 1999, when I was researching his work as part of my GCSE Artist Reference study, and have worked there at intervals ever since. It has been a great privilege to work so closely with an established artist, and be inspired by his creative philosophy. Jan doesn’t believe in mistakes. A ‘mistake’ simply becomes a pointer in a new direction: “Wait! Maybe it’s better that way”, he often exclaims. And sure enough, he’s usually right. 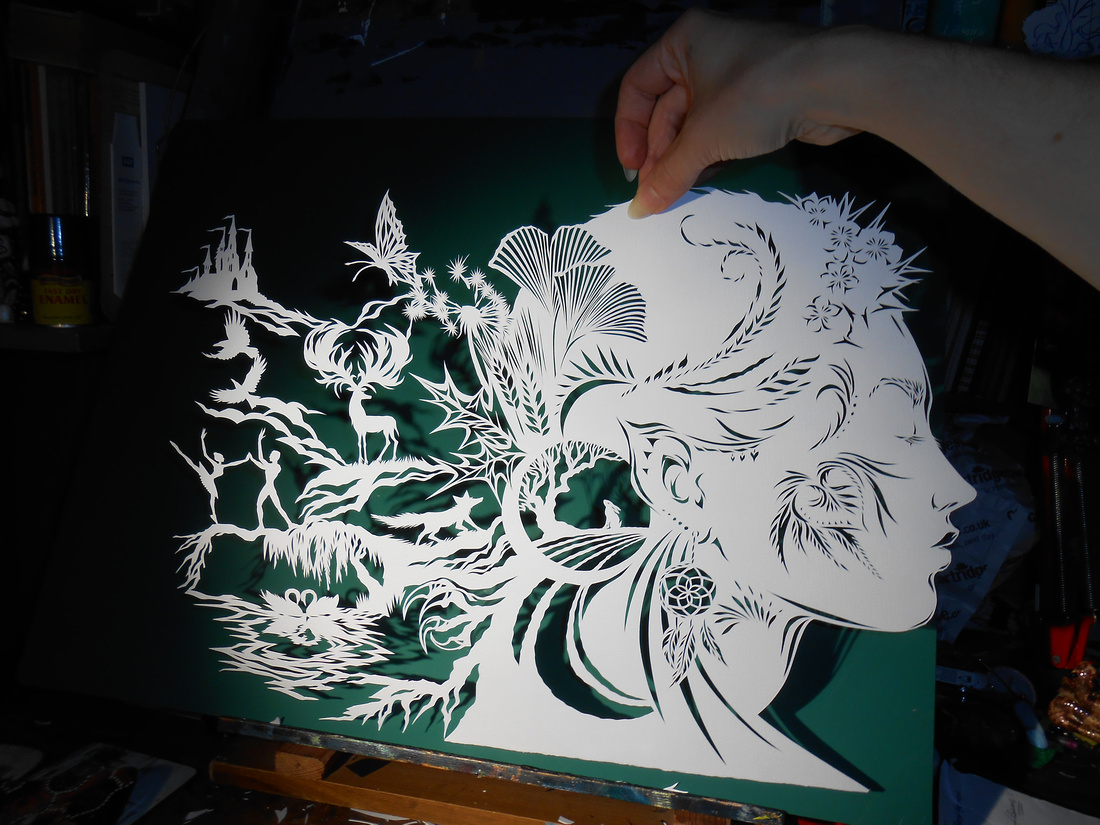 Although I have not learned any paper-cutting techniques from Jan (Jan never uses a scalpel, and has only recently resumed scissor-cutting in the Polish tradition – inevitably prompting comparisons with Matisse, whom he would evidently prefer not to be compared with), it is this carefree, spontaneous approach to the creative process that has been most influential in shaping my own art.

One of the first of Jan’s books that I worked on as a paper-cutter and paper-engineer was The First Noel (Walker Books, 2004), an exquisite re-telling of the Christmas story in the form of a ‘carousel’ book that opens up into a set of five multi-layered laser-cut silhouette tableaux. Laser-cutting has revolutionised paper-cutting in recent years and has become extremely trendy in the context of the greetings card industry, with some stunningly beautiful results. But I sense that people still value the painstaking devotion of creating a unique, hand-crafted work of art. In the case of a paper-cut, this entails cutting out a design, piece by piece, with minute attention to detail. 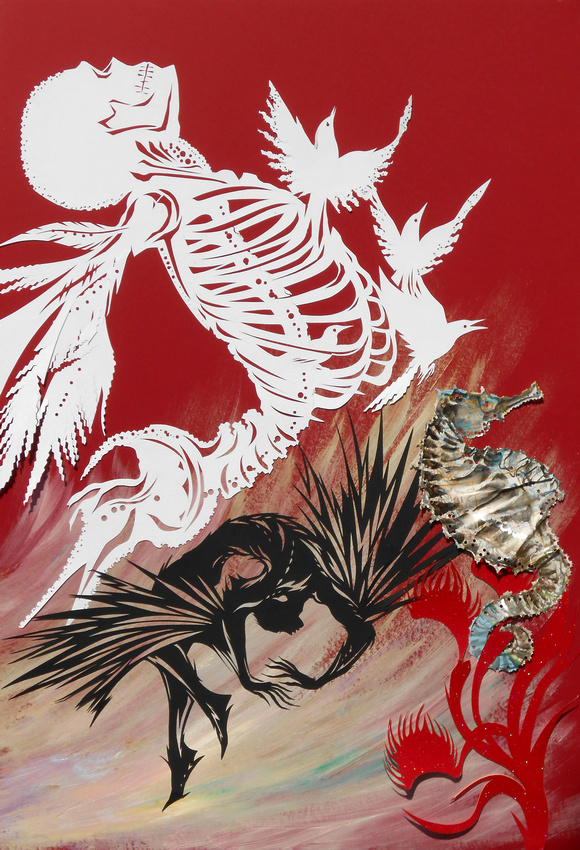 In my view, the biggest danger in paper-cutting is not that of injuries, which I am glad to say I’ve rarely incurred (having more frequently cut myself on the sharp edge of a piece of paper than with a scalpel blade), but of being overly precise. Pedantic obsession with intricate detail can all too easily rob a design of movement. Hence, I balance the blade’s precision with something far less precise: an energetic, freehand scribbled sketch, which takes but a few minutes or even seconds to capture the fleeting essence of what I want to convey.

Cutting out this sketch, piece by piece, gradually choosing which shapes to cut out and which to leave intact, and often inching my way slowly down either side of pencil lines to create a delicate web of interconnected paper strands may take fifteen or twenty hours and require frequent breaks to rest my eyes and replace blunted blades, but the finished paper-cut should still preserve the original energy that inspired it. As I work, I constantly hold the paper-cut up to a light-source, to review the balance of positive versus negative – it is easy to cut more away, but not so easy to add bits back on! 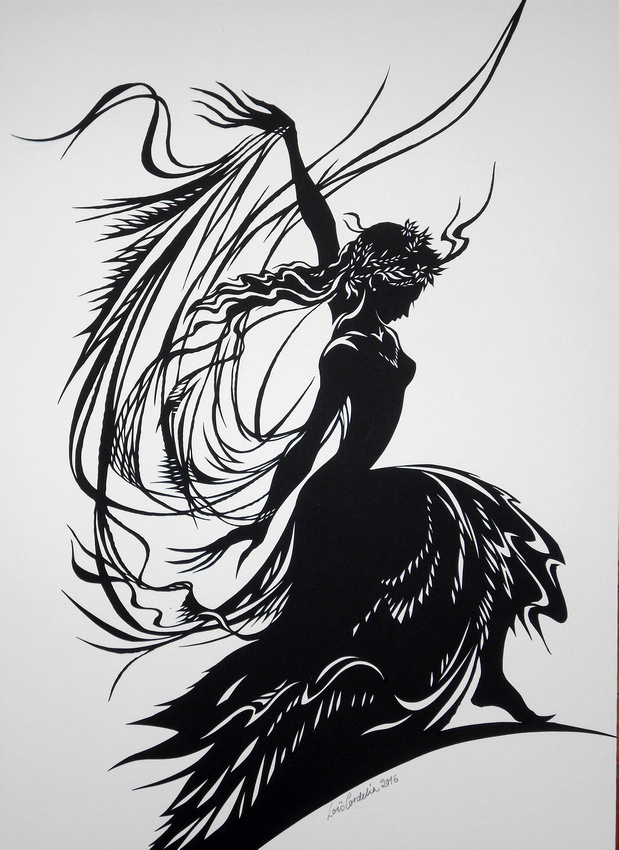 I am endlessly amazed by the versatility and expressive potential of paper-cutting. It may be an obvious choice of medium to evoke delicate imagery such as butterflies and flowers, but it can also take on a bold, graphic quality that eloquently conveys rawness, power and drama.

Every finished paper-cut is a labour of love, and a lot of thought goes into the design. For this reason, I specialise in creating unique personalised cut-paper gifts, most notably for first (i.e. paper) anniversaries, as well as more generally for weddings and birthdays, and always enjoy the challenge of incorporating personal references (names and dates, miniature portraits, flora and fauna, architecture, vehicles, logos, and so on) into the design. I am happy to discuss commissions. Please see my website and contact details below – many thanks for your interest! 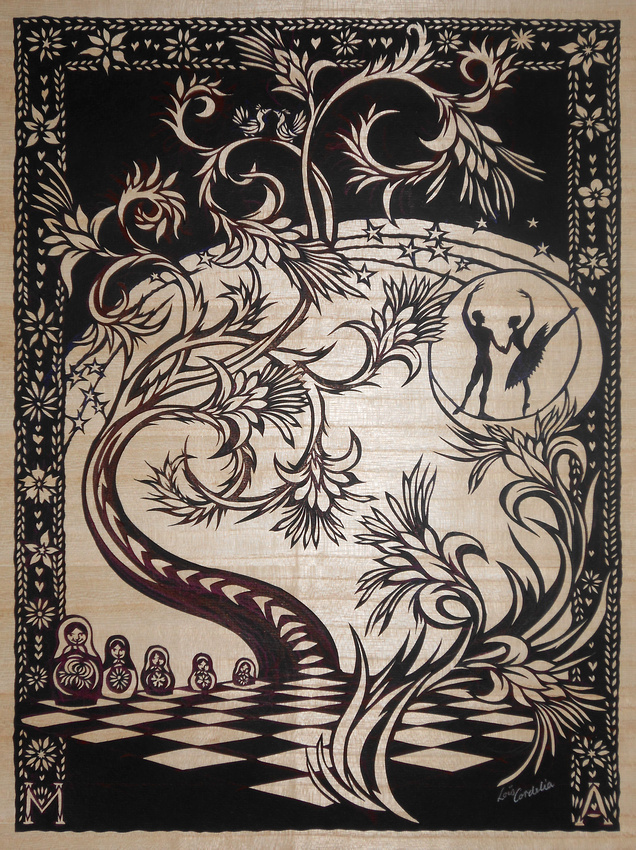