Ipswich artist Lois Cordelia has undertaken some unusual commissions in her time, but among the most challenging to date has been her recent opportunity to create a giant Green Man sculpture out of tens of thousands of discarded plastic drinking straws. The commission is one of several she has completed via MyArtBrief, an innovative online art commissioning platform that connects artists directly with potential clients. Lois has swiftly become the "most commissioned artist" at MyArtBrief since she joined in February 2017.

Lois was commissioned earlier this Summer by Oakman Inns and Restaurants to transform their vast stockpile of black plastic drinking straws into a work of art. Oakman Inns is a UK based pub company who place great emphasis on sustainability, hence they have recently taken the pioneering decision to ban all plastic drinking straws from their business, inspired by a number of recent media campaigns to #TrashPlastic. The plastic straws have been replaced with paper ones, and only upon specific request from customers. Meanwhile, rather than place 60,000 plastic straws into landfill, Oakman Inns chose to commission an artist to refashion them into a meaningful sculpture.

The Green Man theme is intimately linked with Oakman Inns. Two of their pubs are named The Akeman, which is another name for "Oak Man" or "Green Man". The Oakman Inns logo is an oak leaf. Lois's Green Man sculpture will eventually be located at The Akeman Pub at Tring in Hertfordshire, following its refurbishment later this Autumn. Being a lover of trees and Green Man imagery, Lois engaged wholeheartedly with the spirit of this brief and went on to complete a wall-mounted sculpture incorporating several tens of thousands of the drinking straws, threaded, woven and bunched together on a sturdy frame of steel wire. 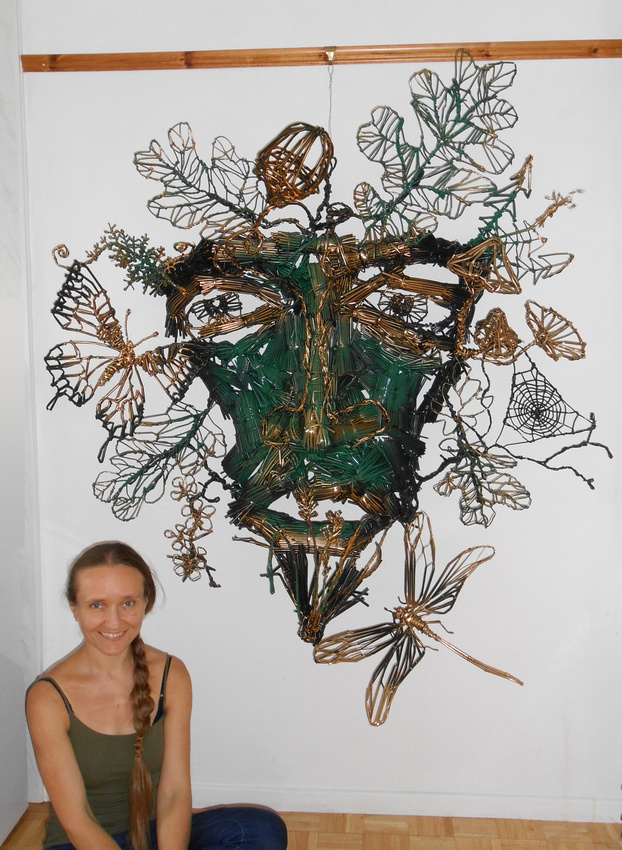 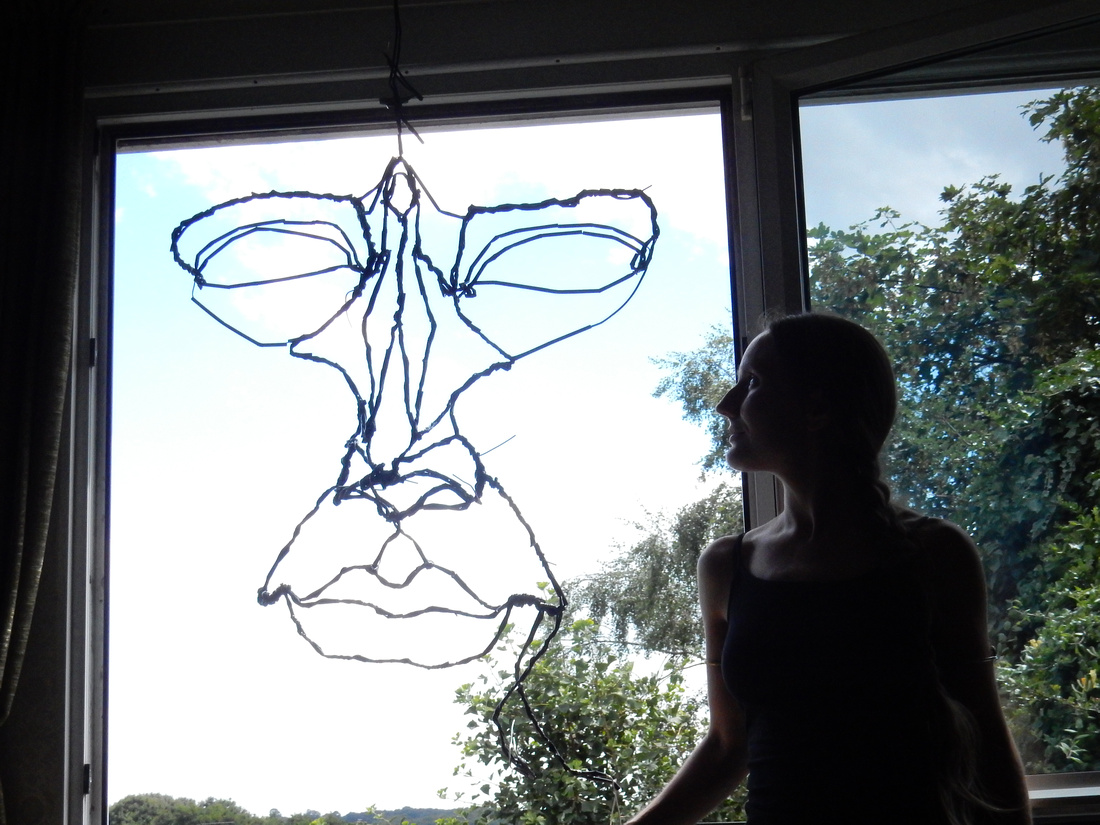 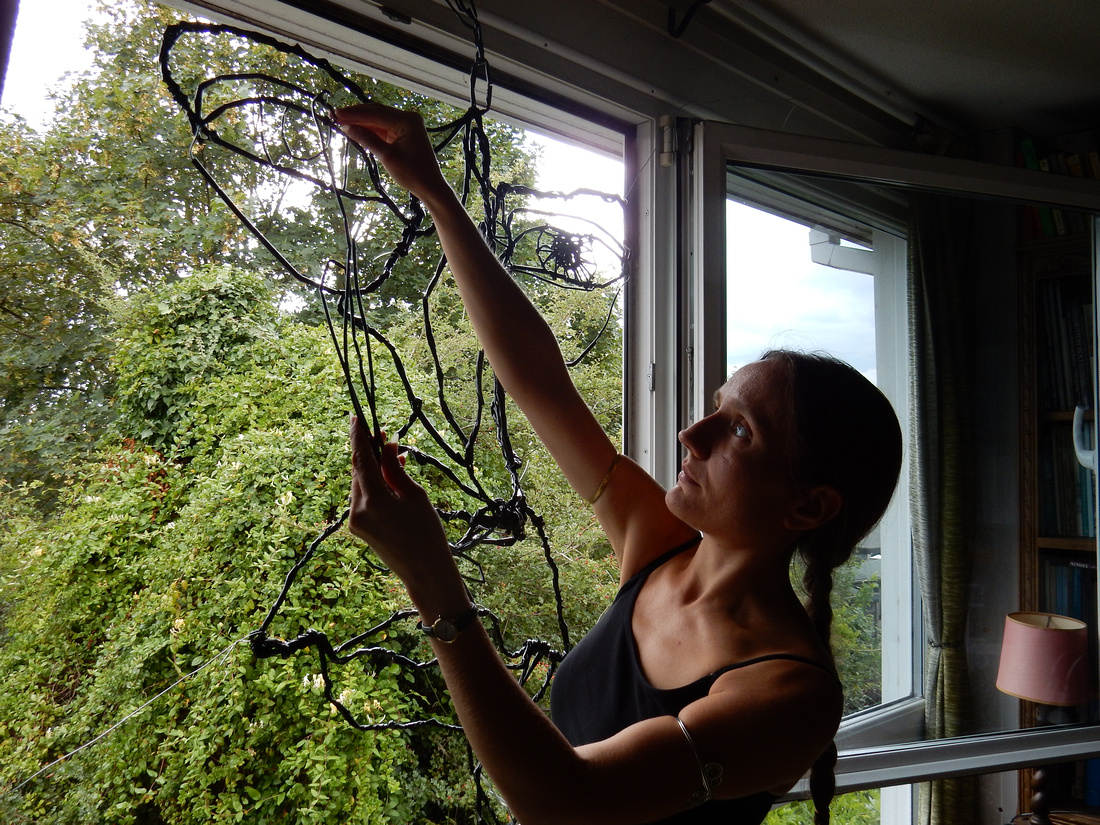 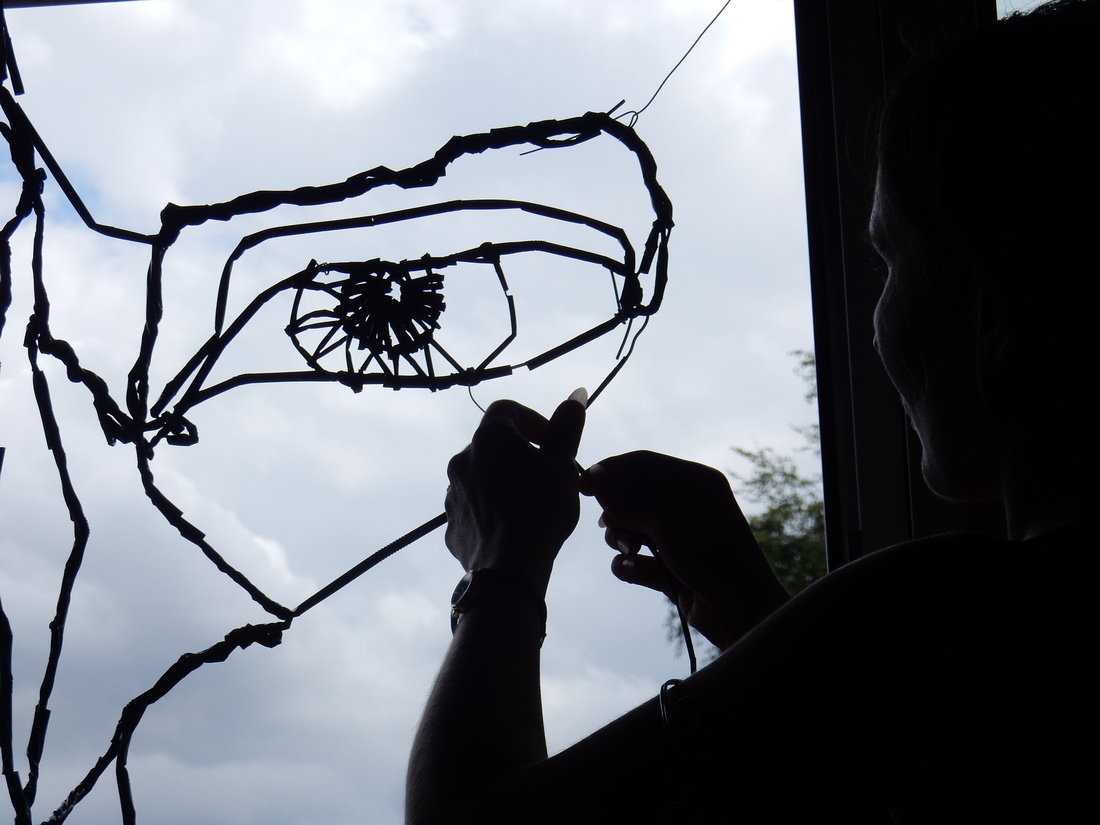 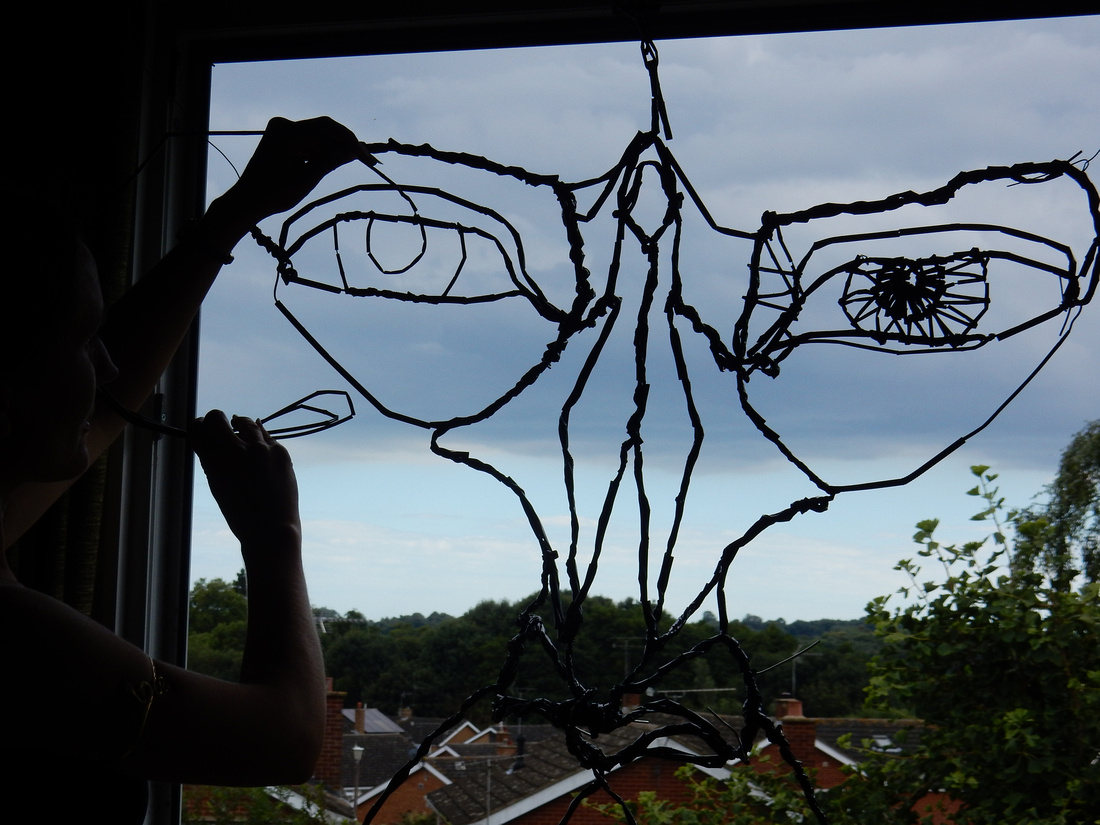 The piece features a traditional Green Man face surrounded by oak leaves as well as a host of intricately detailed smaller sculptures that depict distinctive elements of native British woodland flora and fauna: fern fronds, dandelions, fungi, blackthorn, grasses, swallowtail butterfly, dragonfly, and even a spider's web, suggesting the immense web of interwoven biodiversity supported by the Oak tree. The predominant green and gold colour scheme is inspired by Lois's visits to see the famous Green Man carvings on the ceiling bosses of the Norwich Cathedral cloisters.

The theme is reminiscent of one of Lois's best known papercut works: Gaze of the Green Man (2015), which has inspired a number of poetic compositions and was also published in the first edition of acclaimed US journal A Beautiful Resistance, which has subsequently featured several of Lois's papercut designs. The original framed papercut of Gaze of the Green Man is currently on display at the beautiful family-owned Sugar and Spice Mediterranean Bistro in Llandrindod Wells. Jess and Paul who own Sugar and Spice have also been inspired by this project to insist on banning plastic drinking straws from their restaurant.

Below: Gaze of the Green Man, scalpel papercut, 2015 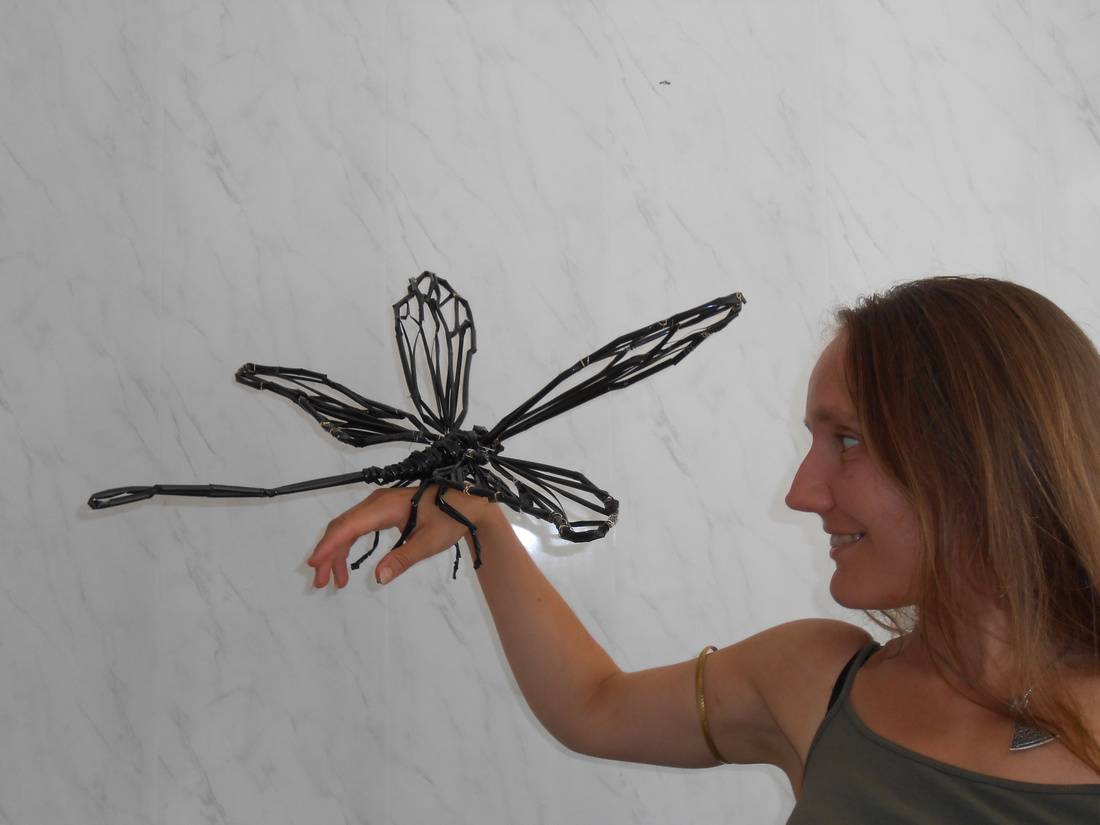 Lois's first experiment in straw sculpture was to create this giant Dragonfly, which seems to evoke a prehistoric age in which such large insects were perhaps preyed on by small carnivorous dinosaurs. 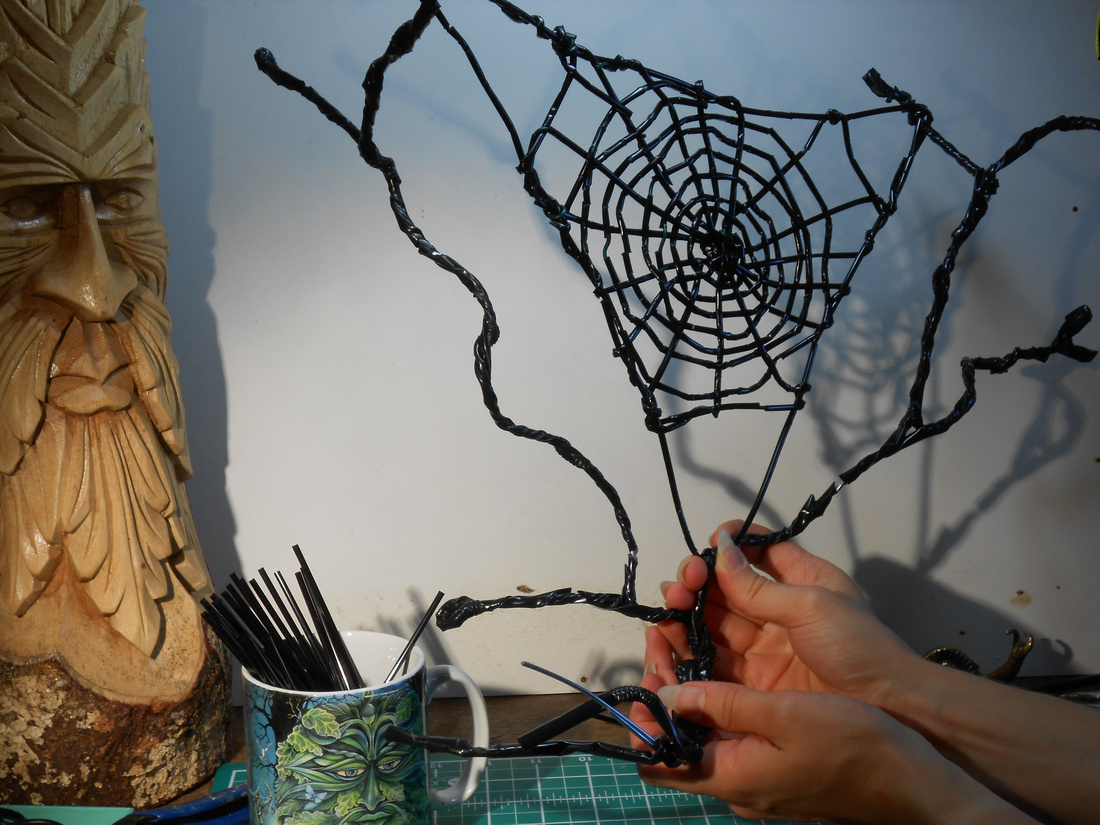 The spider's web is a recurring feature in Lois's artwork, representing the interconnectedness of all things. Weaving her own web out of plastic drinking straws has only deepened Lois's existing respect for spiders! Meanwhile, the butterfly is an enduring symbol of transformation and rebirth, which seemed especially appropriate for a sculpture that transforms plastic rubbish into art. 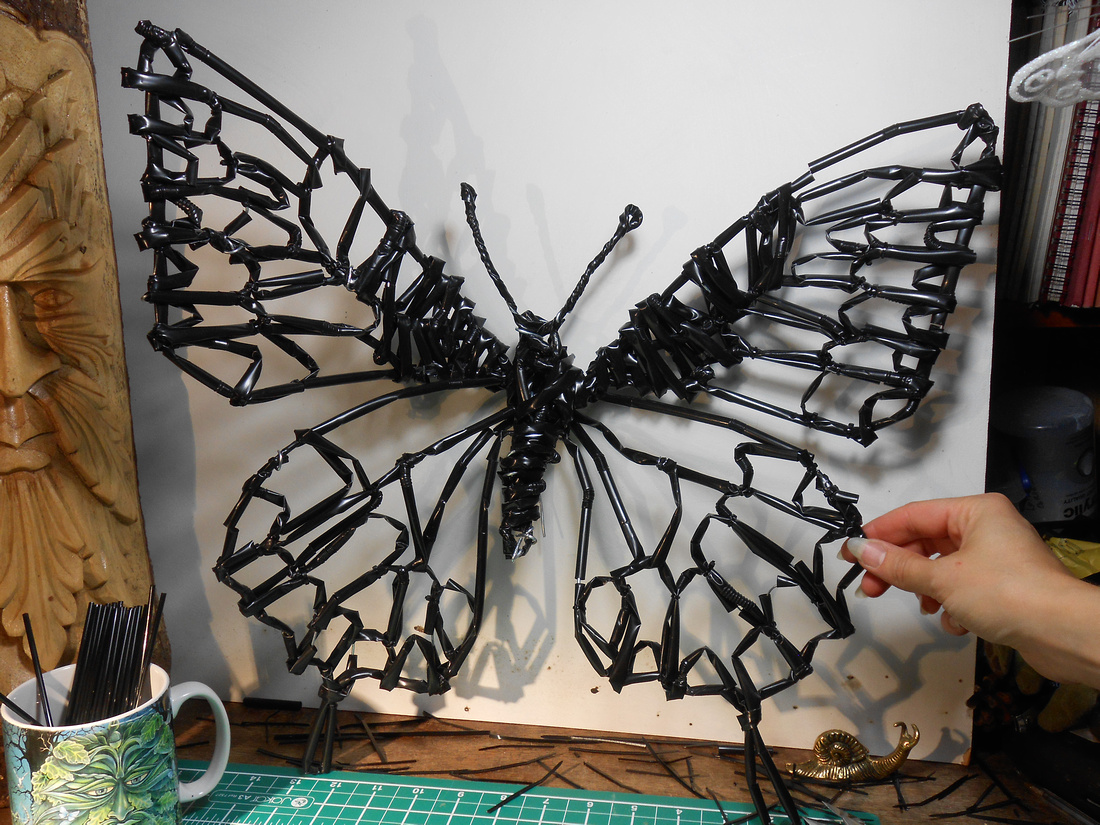 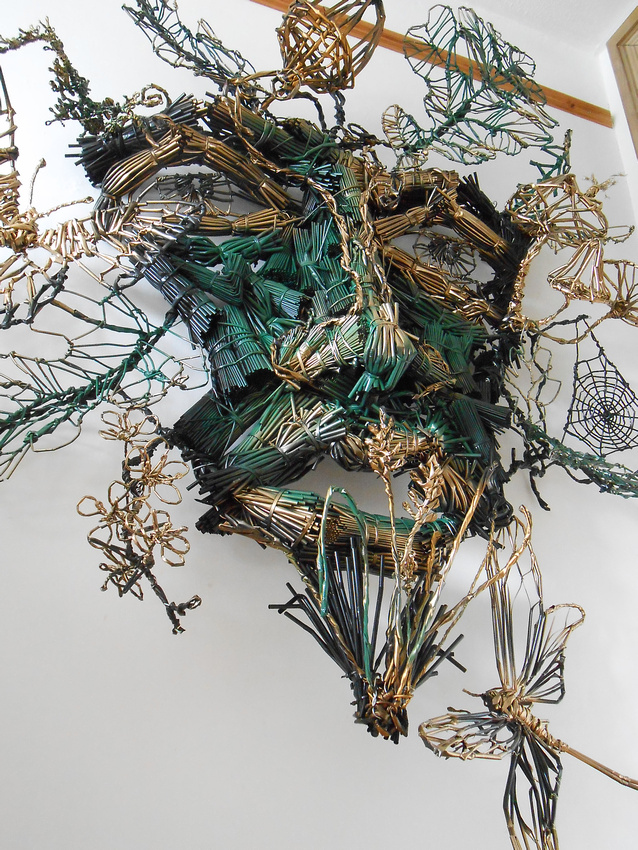 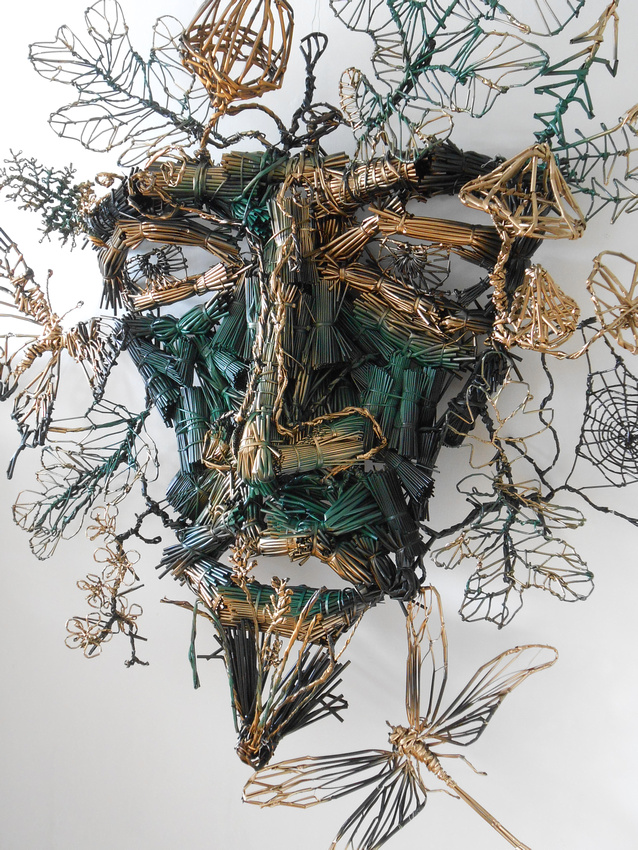