Durrell Gardiens' Gorilla illustrates that We Are All Connected

"The world is as delicate and as complicated as a spider's web. If you touch one thread you send shudders running through all the other threads. We are not just touching the web, we are tearing great holes in it."

These are the evocative words of Gerald Durrell (1925 - 1995), conservationist and founder of the world famous Jersey Zoo (part of Durrell Wildlife Conservation Trust, often known simply as 'Durrell') in Jersey, Channel Islands. Jersey Zoo is celebrating its 60th anniversary in 2019. To mark this occasion, Durrell is working in partnership with Wild in Art to present Go Wild Gorillas, a large scale community art project, with a focus on the beautiful Gorilla family at the zoo, and encouraging people to re-connect with nature. From 27th July until 14th October 2019, more than 30 life-size Gorilla statues, each one lovingly designed and hand-painted by an artist, will go on display around the town centre of St Helier, in the parks, open spaces and parishes of Jersey, and neighbouring Channel Islands, forming a mass exhibition to engage communities, raise awareness and funds.

We Are All Connected

Ipswich artist Lois Cordelia is delighted to have had her design We Are All Connected chosen by the Durrell Gardiens and will travel to Jersey in May 2019 to paint it onto one of the Gorilla statues for Go Wild Gorillas. The Durrell Gardiens are the true 'guardians' of Durrell, a small group of dedicated individuals who ensure the zoo's wellbeing by supporting its vital conservation work through annual donations, fundraising, events, and acting as Durrell Ambassadors worldwide.

Lois's design was inspired directly by the words of Gerald Durrell cited above, comparing the world's eco-system to a giant spider's web, which is characterised by its complexity and interconnectedness, but sadly a spider's web is also extremely fragile, and destroying parts of it will affect the rest of the web. All things in nature are connected. Nothing has evolved in isolation. Every organism depends on other organisms for food, shelter, habitat, life processes, and often a myriad of other intricate symbiotic relationships that scientists are still only just beginning to understand.

The symbol of the spider's web links with Lois's papercut artwork, in which she creates intricately detailed designs by cutting out of paper: every tiniest detail of the papercut is connected, often via strands as thin as pencil lines. 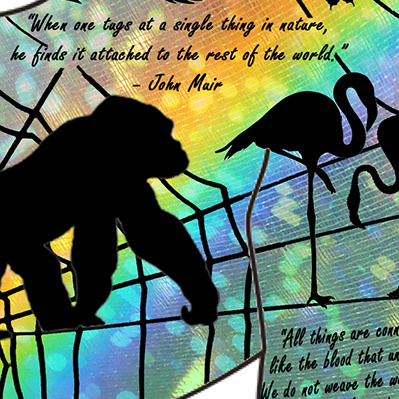 Above: a tiny teaser of We Are All Connected - N.B. Lois cannot reveal the full design until the trail goes live on 27th July. Watch this space!

The theme of interconnectedness also emphasises Durrell's initiative to "better connect a million people with nature" by 2025. Beauty is one of many pathways that help us to re-connect with the natural world. Public art trails focus on the beauty of art, while also encouraging people to get outdoors and engage with others and the environment. Re-connecting with nature makes people healthier and more productive. Hence, Go Wild Gorillas 2019.

Lois read most of Gerald Durrell's books as a teenager and was greatly inspired by his stories of an idyllic childhood growing up on the island of Corfu, hilarious anecdotes of family life among the Durrells and their friends, and later worldwide expeditions to preserve endangered animals and found a zoo in Jersey.

Below: Lois Cordelia holds a recent portrait of her childhood hero, Gerald Durrell. Her fluffy mascot is not a Gorilla, but a Dodo - emblem of Durrell Wildlife Conservation Trust. 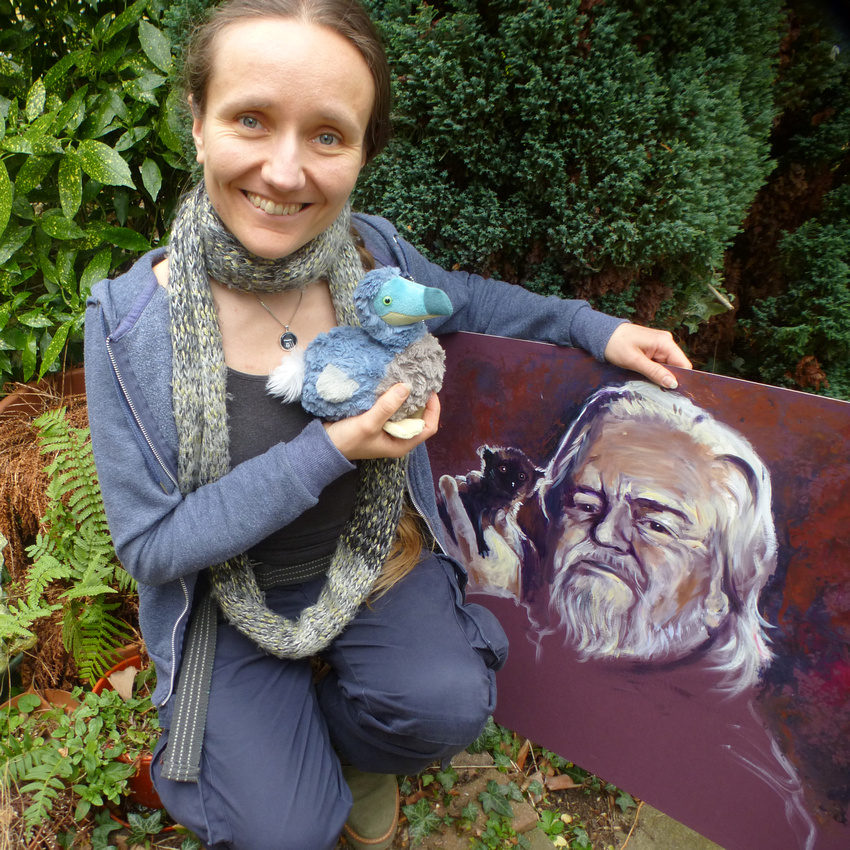 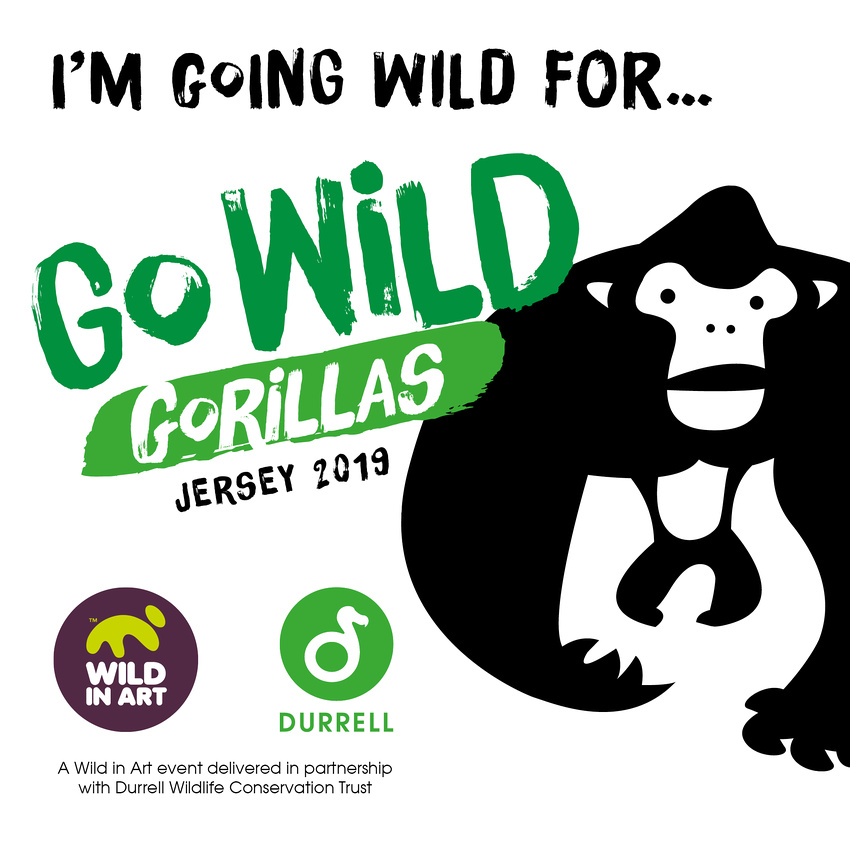 Lois Cordelia will paint her design onto a blank three-dimensional Gorilla canvas at Jane James Ceramics (20 Commercial Buildings, St Helier, Jersey JE2 3NB) between Monday 6th - Wednesday 8th May 2019. All are welcome to drop by, glimpse a sneak preview of work in progress, ask questions and be inspired.

Appropriately, Wednesday 8th May will also be the 93rd birthday of Sir David Attenborough, who is one of Durrell's patrons! Lois will be very proud to celebrate along with the Durrell Gardiens.

See map below for location of painting space. 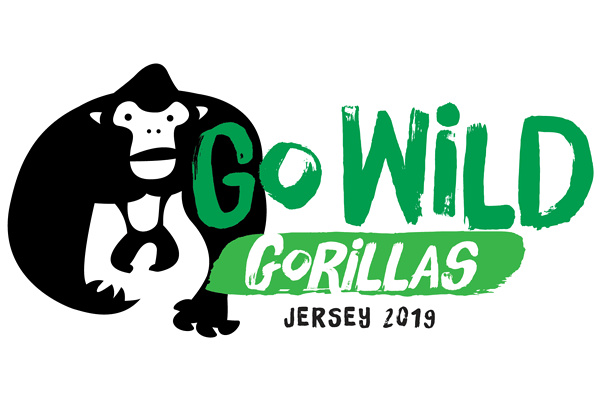 On 6th November 2019, the 30+ Gorilla statues will be auctioned to raise vital funds for Durrell Wildlife Conservation Trust and the new Gorilla home at the zoo - your chance to own a unique Gorilla!

Creative event producers Wild in Art (founded 2008) have successfully facilitated the raising of more than £10 million for charitable causes to date, and made art accessible and engaging for millions of people.