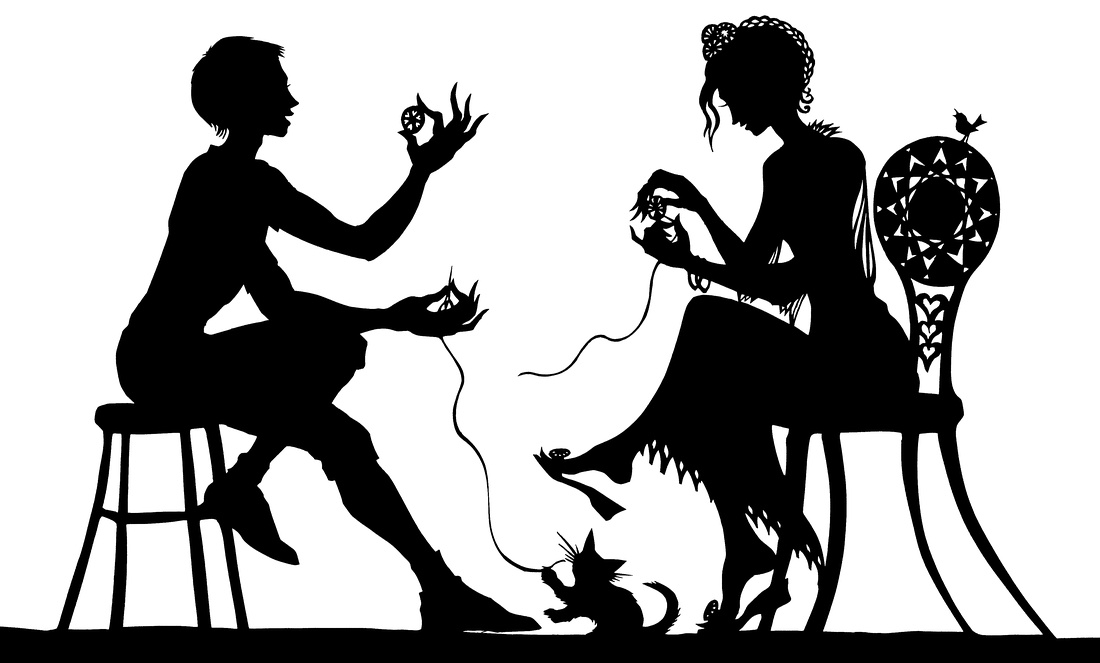 Sabine crafts exquisitely decorative buttons (German: “Knöpfe” = “buttons”), using only a metal ring as a base, a needle and thread (German: “Zwirn” = “yarn”, or “thread”) of various colours. The finished buttons are intricately structured and patterned, and make a stunning addition to clothing, handbags, and other accessories. Sabine teaches courses in ornamental button-making craft. Zauber der Zwirnknöpfe is her fourth publication to date. Her buttons have also been poetically called SternenKnöpfe (“Star-Buttons”), and it is easy to see why. Their radial symmetry suggests not only stars, but also flowers, wheels, eyes, lamps, candles and other radiant sources of light, colour and beauty. 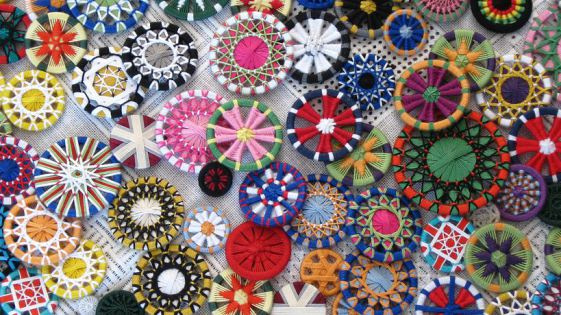 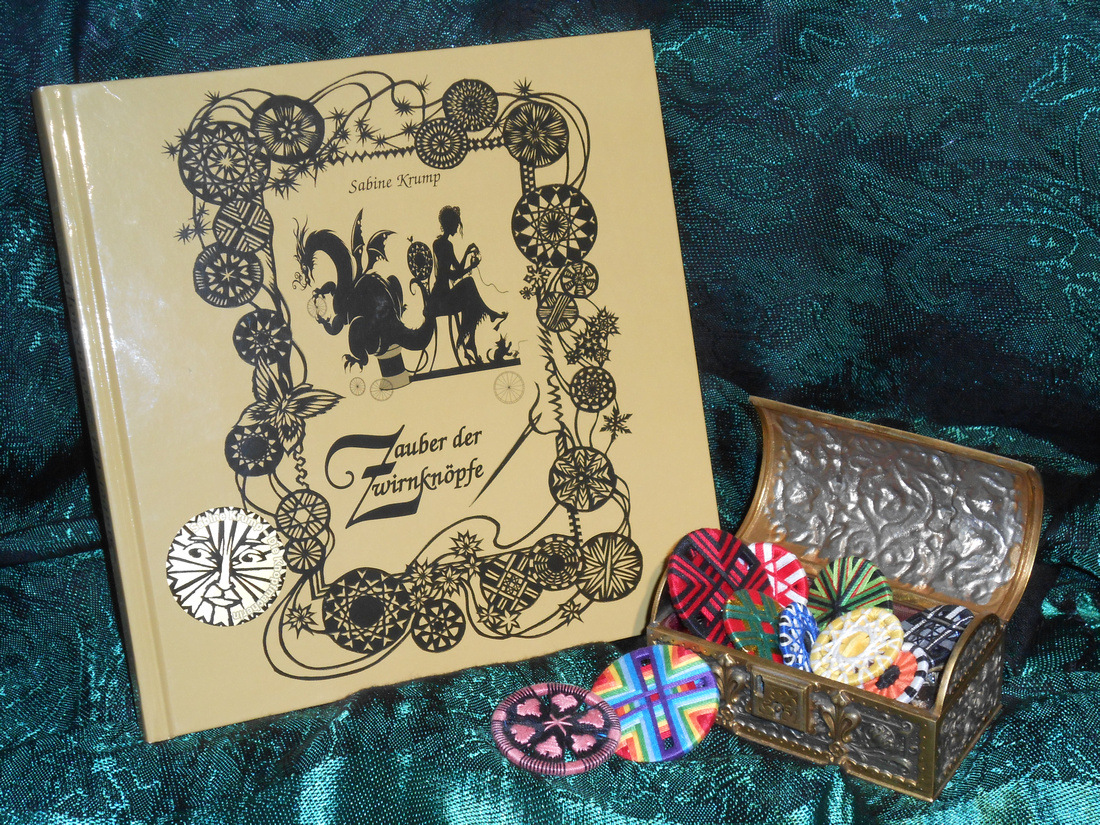 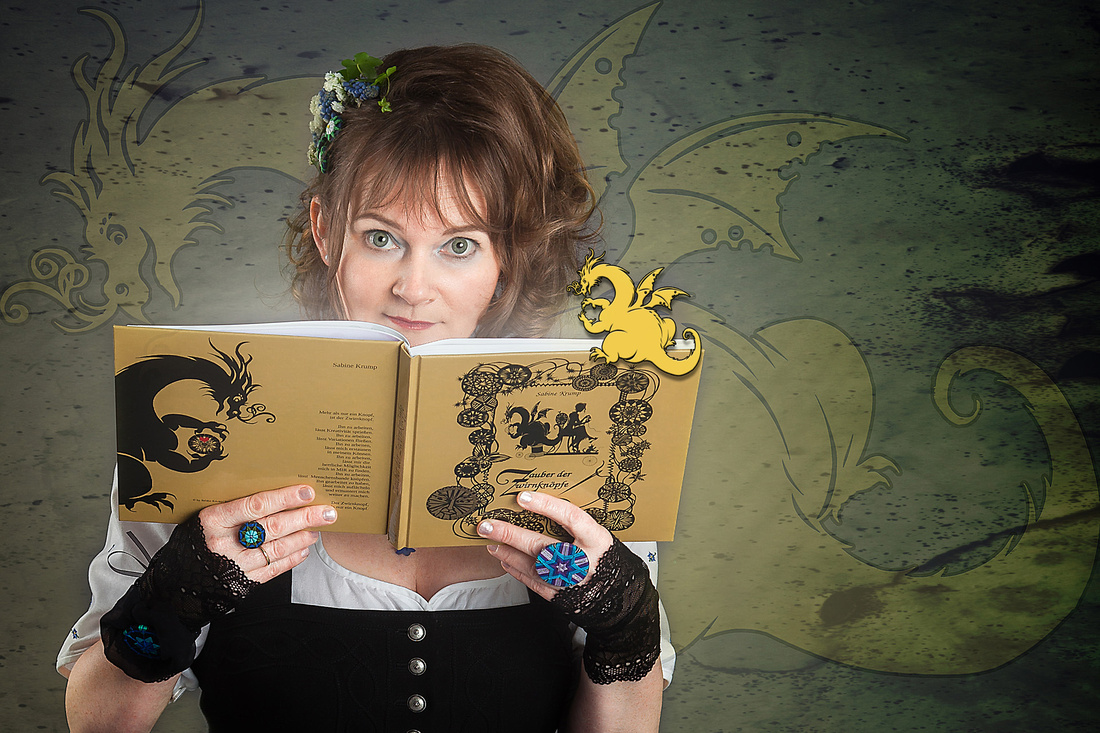 Above: Sabine Krump with her new book, Zauber der Zwirnknöpfe, wearing some of her own "thread-button" creations. (Image copyright: Sabine Krump, 2016. Used with kind permission from the author) 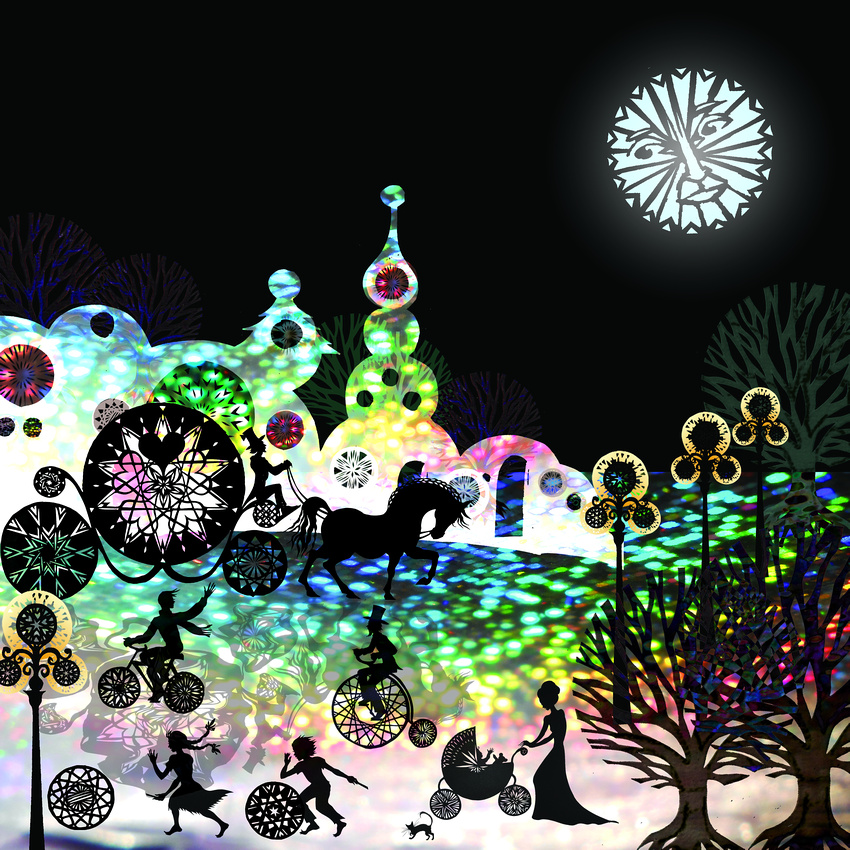 Sabine asked Lois to create a set of illustrations for a fairytale story that centers around her “Thread-Buttons”. The setting is a village, where everything is made of round buttons: the windows and doors, the wheels of bicycles and carriages, the street lamps, even the Moon. But the people of the village are worried: a dragon named Dragana is stealing all their buttons and hoarding them away! Who will come to the rescue and restore the people's button treasures?

Lois's illustrations for Zauber der Zwirnknöpfe developed as a synthesis of her diverse artistic mediums. The emphasis is always on scalpel paper-cutting, combined with elements of sketching, drawing, acrylic painting, photography and digital art.

Fairytale books and imagery, particularly silhouette style illustrations, including those of Jan Pienkowski and Lotte Reiniger, have always been a big influence on Lois, ever since her earliest childhood. These days, she endlessly explores, experiments, and develops her own styles of illustration, to create magical and unexpected effects. She wants to inspire the viewer (whether child or adult) to notice a world full of wonders, and never to lose sight of the magic in life.

In her illustrations for Sabine Krump's Zauber der Zwirnknöpfe, Lois Cordelia wanted to evoke specifically the intricate handiwork that characterises Sabine's beautiful “thread-buttons”. Delicate paper strands, a little thicker than pencil lines are painstakingly cut out by hand using a surgical scalpel blade, corresponding to the threads of yarn. Both paper-cutting and thread-button-making are time consuming creative processes. In this context, one art form has influenced another.

Lois combines the geometric form of the thread-buttons with all things circular: round wheels, windows, houses, trees and lamps. But the buttons also manifest in many other forms in the pictures. Even Dragana, the friendly lady-dragon, is composed purely of curves. The circular radial geometry and curves of the buttons are complemented by thin, elongated human figures, composed of sweeping lines, that echo the narrow, pointed needle and free-flowing thread. 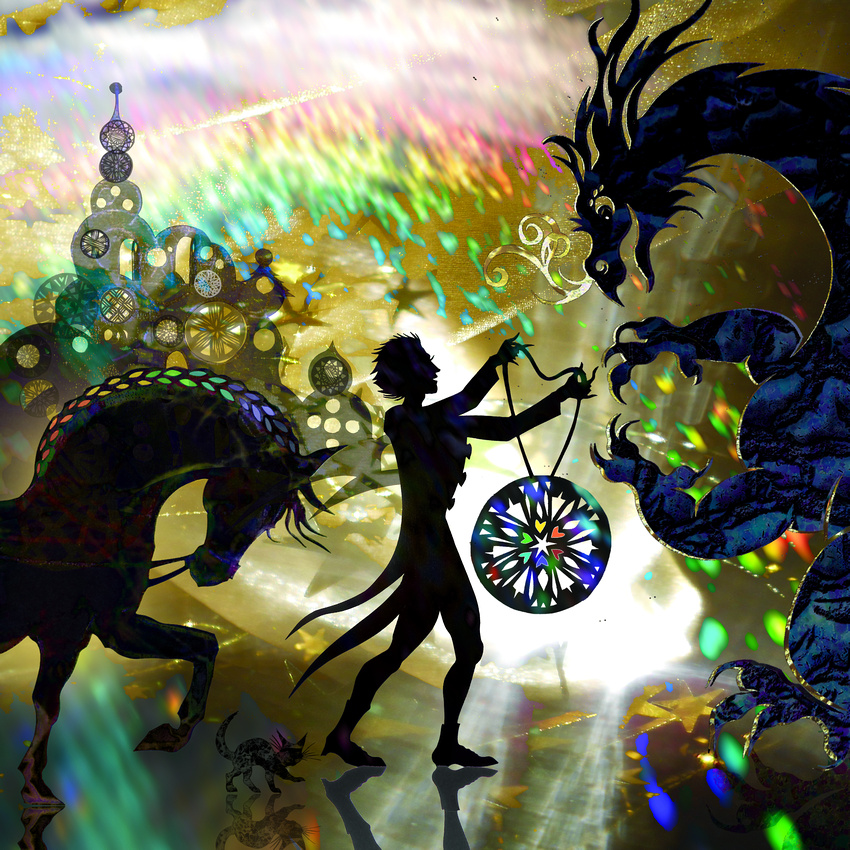 The illustrations also feature heart motifs, suggesting the love and devotion that are essential to any art or craft form, and star motifs, representing the thread-buttons themselves. The thread-buttons become star-buttons, and hence also real treasures. Sabine and Lois's collaboration culminates in the glowing golden treasure chest. 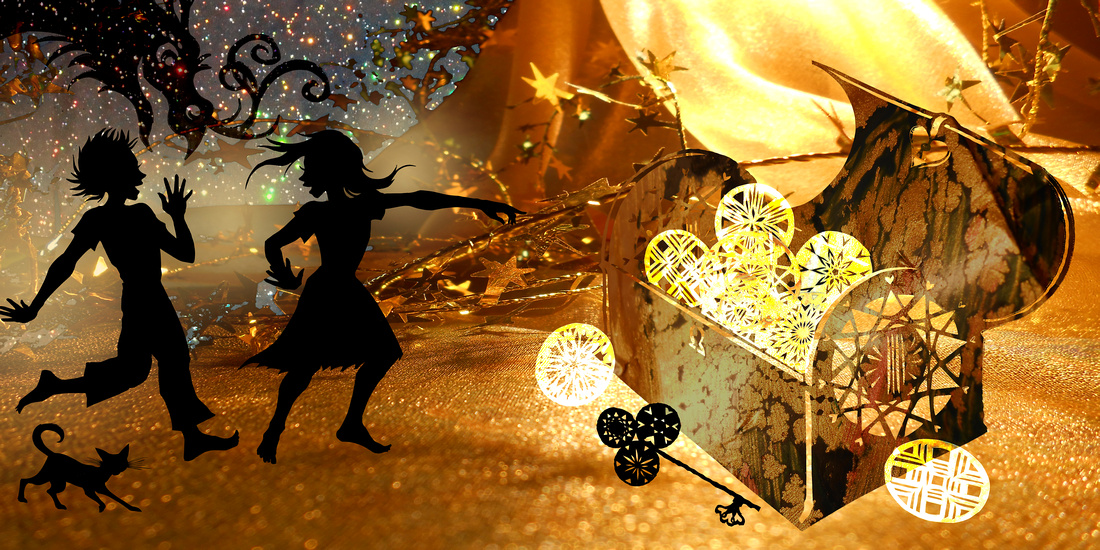 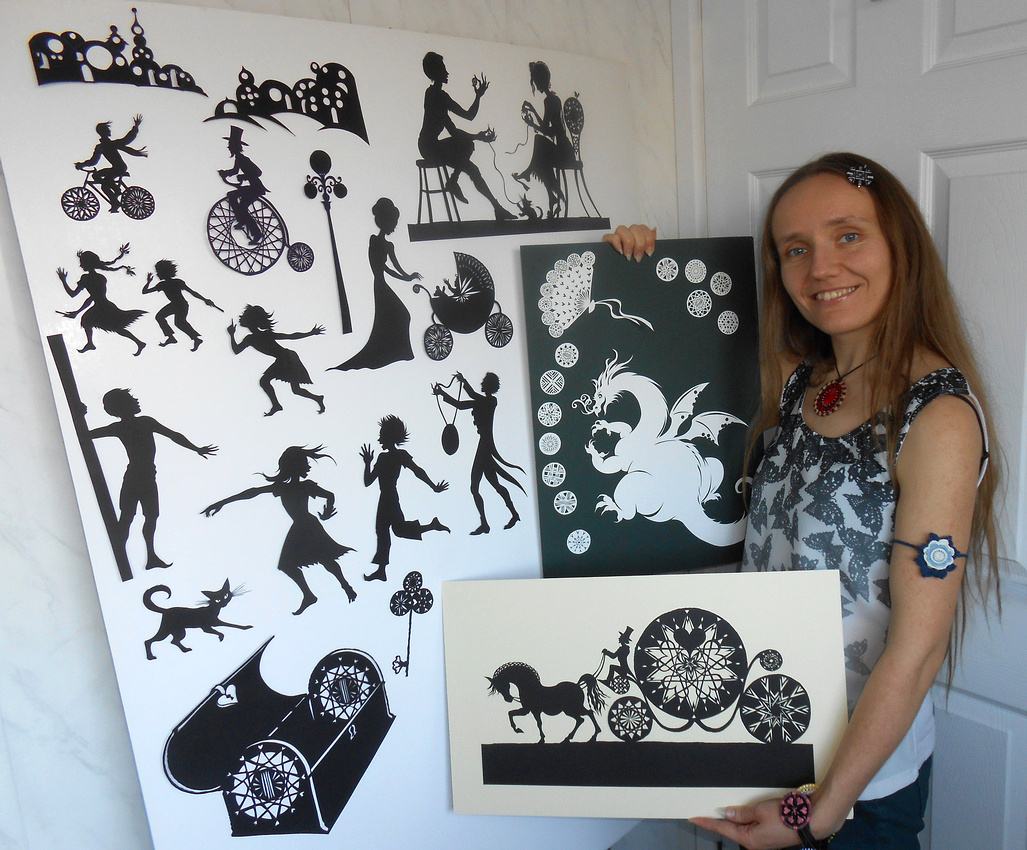 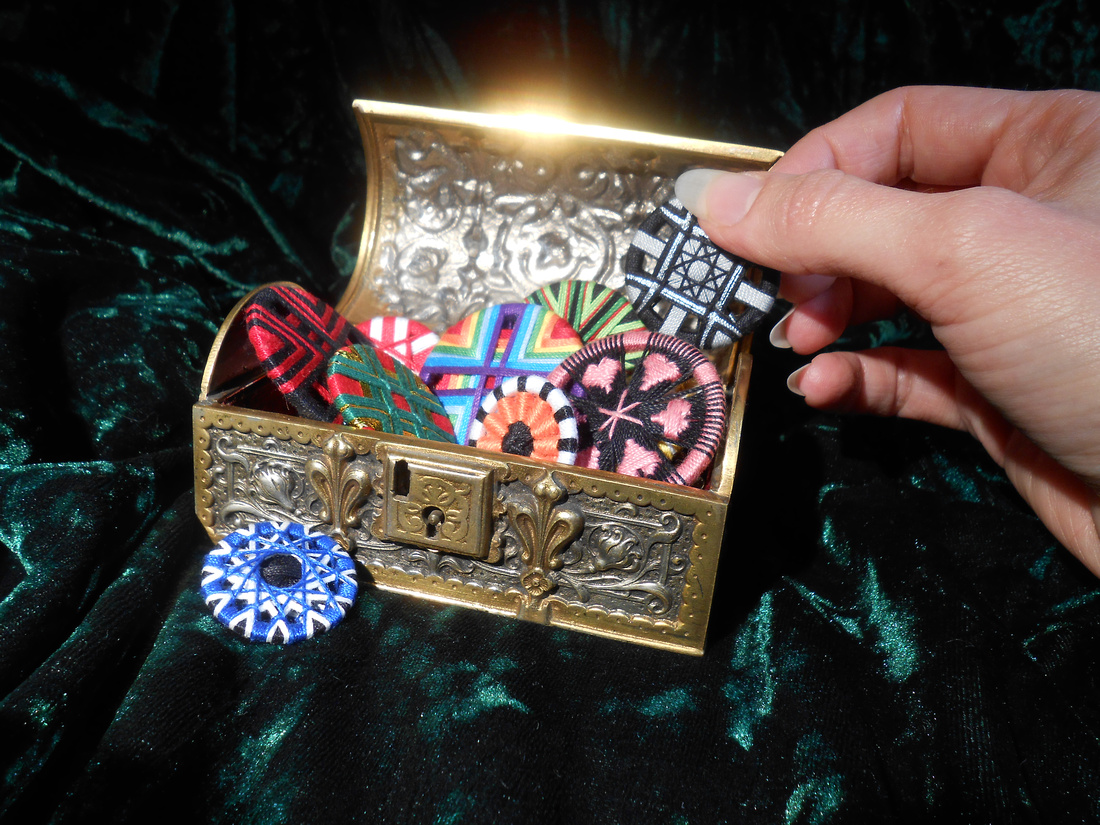